Best dystopian TV shows and how to watch them

One of my favorite types of television programming has always been those set in alternate universes where society is attempting to deal with or overcome pervasive pain and injustice. This is what we would refer to as a dystopian universe, and, believe it or not, many television programs include them.

If you want to watch some fantastic dystopian TV shows, like The Handmaid's Tale, Black Mirror, and more, there are many options available, ranging from some of the best shows on Netflix to some wonderful ones on Amazon Prime.

Here are a few of the top dystopian TV shows with streaming options:

Netflix's international program 3% tells the stories of numerous 20-year-olds who all reside on the desolate "Inland." They now only have one chance to become more socially advanced and live peacefully on the "Offshore" settlement. Only 3% of candidates are chosen after some are dropped and others fail to advance.

3% has elements of The Hunger Games series, but without all the bloodshed. It resembles the wealthy wanting to kill the poor more than the participants trying to kill each other in a battle royale. To survive to the end, it takes a fight of wits, cunning, and bravery, which leads to strong bonds between individuals that you truly want to root for—until they perish. However, the show is still entertaining to watch. One of the top Netflix television shows, in my opinion.

The Handmaid's Tale, a Hulu original series, explores the lives of women in Gilead, a totalitarian state situated in what was formerly the United States. A revolt begins as a result of the fundamentalist regime that controls society and treats women like property.

There is a solid reason why The Handmaid's Tale has garnered so many accolades. The entire cast of The Handmaid's Tale is incredibly skilled, with Elisabeth Moss, the show's leading lady, playing one of her best parts to date. The narrative is powerful despite at times being bleak. This program doesn't hold back.

Parallel universes that are not too far from our own are the focus of the popular sci-fi series Black Mirror, which frequently tells tales about the effects of particular types of technology on their society and how they may either improve life or turn them upside down.

Black Mirror is undoubtedly one of those programs where some of the episodes might leave you scratching your head in confusion. However, for every episode like that, many more amazing episodes of Black Mirror are truly excellent pieces of dialogue about the impact of technology and what it's doing to our society. There is something for everyone to enjoy, but "Nosedive," a meditation on the effects of social media, is my personal favorite.

A group of 100 disobedient young adults is dispatched to the wrecked Earth from what is left of human society on the Raft in space in the hit CW series The 100. When they arrive, they discover they are not alone and that what they had anticipated was not what was there.

The 100 is undoubtedly one of the best CW programs I've seen. The world-building is amazing, the characters are incredibly entertaining to watch, and the relationships that develop are some of the best ones in teen television and are much more believable than those found in other specific CW shows (looking at you, Riverdale). It's also fascinating to imagine how the planet may appear following a nuclear extinction, including some of the species that have survived or how some people have changed.

Snowpiercer, a television series based on the same-named motion picture, takes place in 2026, seven years after the planet was transformed into a frozen wasteland. What's left of human civilization is now situated on an opulent train that never stops rolling.

Because the concept is so novel, Snowpiercer is unquestionably one of my favorite new shows to debut in the previous few years. Here, Earth just froze over owing to climate change, and they develop a pretty interesting plot with plenty of action. Usually, many fictitious worlds disintegrate due to nuclear wars, asteroids, or other events in movies and television. The rest of the cast, including Daveed Diggs and Jennifer Connelly in the lead parts, also excels.

Raised by Wolves is an HBO Max original series that centers on two androids who are given the responsibility of rearing human children on Kepler-22b after a catastrophic battle decimated Earth. The two androids are suitably dubbed Father and Mother.

I enjoy dystopian television series, but Raised by Wolves was one of the few that gave me the chills. Not in a horrible manner, more than watching these machines raise human children as if they were human was uncomfortable, but that's a tribute to Raised by Wolves' incredible effects team and make-up department. One of the best HBO Max originals to date, Raised by Wolves features a lot of action, captivating characters, and an intriguing plot.

In the anime Attack on Titan, human civilization is contained between three enormous walls as a defense against Titans, monsters with human features that will consume humans. But when a nearly unstoppable Colossal Titan decimates the city, a group of young adults join together, enlist in the Scout Regiment, and make a promise to find a means to finally defeat these Titans.

I understand that not everyone like anime, but allow me to suggest that you watch this particular episode. I got sucked in from the first episode on. They don't even pause to slow down. Before you are thrust into the action, there are about five minutes of serenity, and it doesn't stop at all. You'll fall in love with the characters, be heartbroken when they pass away, adore how badass they are, and discover a ton more about the wonderful, dark fantasy setting of Attack on Titan. 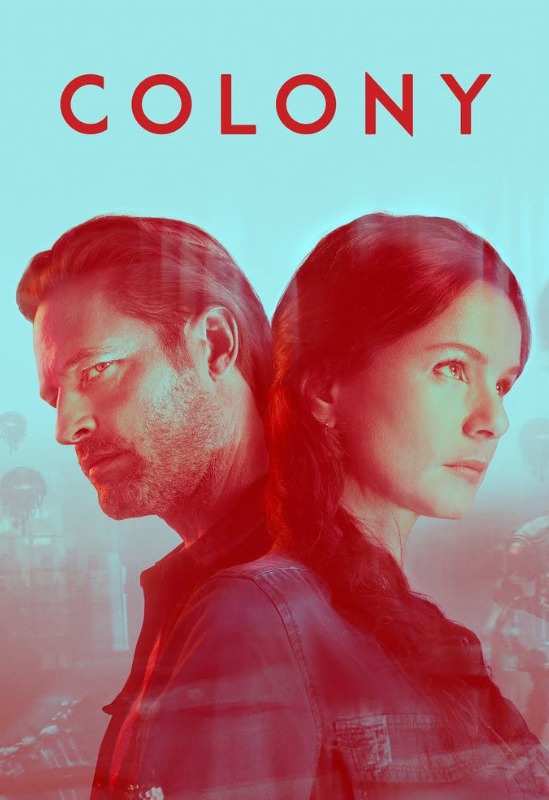 You didn't believe we'd have a list of dystopian novels without including anything about aliens, did you? Colony centers on a family shortly that must continuously make difficult choices to stay alive and stay together following a mystery extraterrestrial invasion.

Even though Colony had just three seasons, I still believe that it deserved a lot more attention than it did. The fact that this show is not about your conventional invasion of aliens is something I truly appreciate. At first, it merely seems like these aliens want to take over humanity, but as time goes on, things start to get a little darker, and the stakes are heightened. These aliens aren't huge killers that would probe you or suck out your brains. 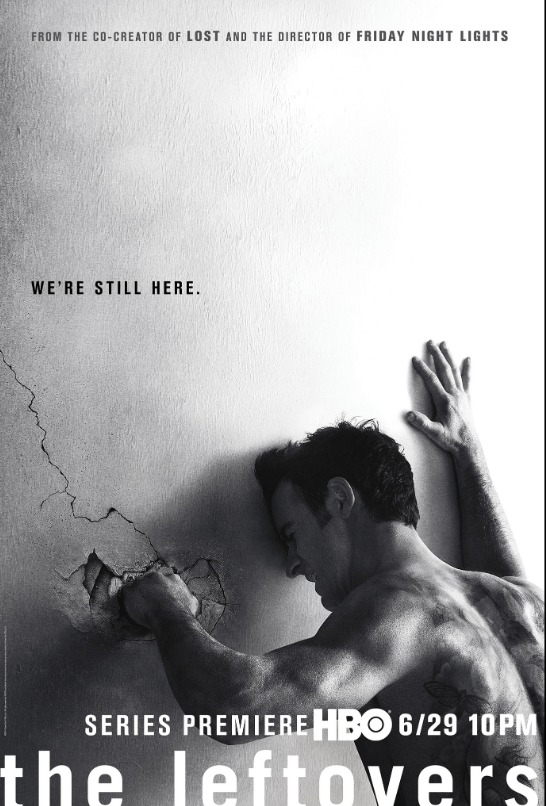 The Leftovers, a supernatural TV series, picks up three years after "the Sudden Departure," a global occurrence that saw 2% of the world's population vanish mysteriously. We follow a group of people who are adjusting to life without their loved ones and are finding it difficult to move on.

2% of the world's population may not seem like much, but consider this: there are 7.753 billion people in the globe. There are 155,050,000 people or 2% of the total. That translates to well over 100 million people who just up and disappeared. That's genuinely terrible to consider, yet The Leftovers effectively addresses that strange idea and crafts a narrative that everyone will find engaging, moving, and fascinating to watch.

The Walking Dead, a long-running AMC program, centers on the lives of those who managed to survive when a virus suddenly broke out and turned everyone into zombies, or what is known as "walkers" in this world. They must now try to survive not just the dead but also the living.

I am aware that the first few episodes of The Walking Dead seem a little more post-apocalyptic, but as the series goes on, societies are established, lines are drawn, the stakes are heightened, and it becomes more dystopian. Through it all, some lovely friendships are forged, villains who you'll either love or despise, and amazing romances that are made. There are ten seasons of this show available to view, and the eleventh and last seasons should be available soon.

11. The Man In The High Castle (Amazon Prime)

The Man in the High Castle is the last show we look at. America lost the Second Planet War in this dystopian society, and Nazi Germany and Japan now rule the world. But as time passes, a revolution starts to spread from within, having an impact throughout the nation.

Because it seems a little too real, The Man in the High Castle is one of the scariest shows to me. Just consider the possibility that something similar to this might have truly occurred in our society at the time, but happily, it did not. The entire plot is captivating, and there are various surprises along the way that will have you clicking "Next Episode" as soon as the current one is through. One of the very best Amazon originals ever.

A fictitious state or civilization in which things are going awry is called a dystopia. It is the reverse of a utopia. The word itself covers a wide range of situations, from one in which a world has been completely devastated by a catastrophic event to one in which a totalitarian terrible regime has constructed a condition of utter injustice.

Also read: American Horror Stories season 2: Next episode, everything you need to know

What was the first dystopian story?
Before Ernest Cline's “Ready Player One”, George Orwell's “Ninteen Eighty-Four” and Aldous Huxley's “Brave New World”, there was Yevgeni Zamyatin's “We”, the first dystopian novel ever written. The book is a satire on life in a collectivist futuristic state, “One State”, located in the middle of a wild jungle.
Is Fahrenheit 451 a dystopia?
Ray Bradbury's Fahrenheit 451 is one of the most famous and popular novels ever written belonging to the literary genre known as “dystopias.” This term is derived from “Utopia,” the word that Thomas More used for the title of his sixteenth-century novel depicting an ideal society.
Is Harry Potter a dystopian?
As we have seen the Harry Potter series seems to serve as a gateway for YA dystopian literature and stands as the first novel to develop key dystopian themes for children and young adults.
What are the 7 common dystopian themes?
Environmental disasters, Sli-fi (climate science fiction) Disease, Government control. Typically with divisions within society including class, intelligent, abilities, etc., Technology Control. Robots, Elements of Survival. Religious control. Loss of individualism.
What is the most famous dystopian story?
One of the best known dystopian novels of all time, 1984 is George Orwell's terrifying vision of a totalitarian future in which everything and everyone is slave to a tyrannical regime lead by The Party.
Advertisement
You May Like This

10 best horror movies of all time according to the...