Blake Lively who is currently expecting her fourth baby with Ryan Reynolds dropped a playful comment on his Instagram post after watching his dance rehearsal video for Spirited. Blake Lively and Ryan Reynolds are one of the sweetest couples in Hollywood and the duo shy away from teasing one another in sweet ways. Blake, who is expecting her fourth child with Reynolds dropped a flirty comment on her husband's recent Instagram post. Ryan who recently starred in a musical dropped a video of himself rehearsing his dance moves.

Ryan Reynolds and Will Ferrell recently starred in AppleTV+'s Christmas musical Spirited and the actor gave a behind-the-scenes look at the same in his recent Instagram post. Sharing a video of his and Ferrell's dance rehearsals from the film, Reynolds wrote, "You’ve got to be willing to be bad at something if you want to be… slightly less bad at it? Here’s Will and I proving that point! We’re so humbled by all the love for #Spirited on @appletvplus."

After Ryan shared the reel of him practising the dance moves for Spirited, the best reaction to the video came from his wife as Blake wrote, "Can you get pregnant while pregnant??" It was confirmed back in September that Lively and Reynolds are expecting their fourth baby together. The actress later debuted her baby bump while attending the 10th annual Forbes Power Women’s Summit in a golden dress. The couple who tied the knot in 2012 are already parents to three daughters, s James, 7, Inez, 5, and Betty, 3. 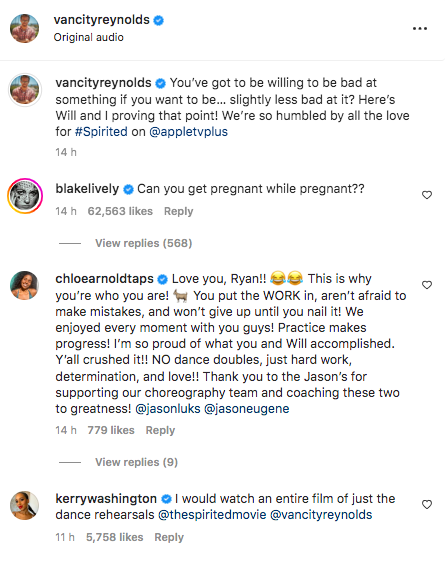 Ryan Reynolds on his baby No 4

Ryan Reynolds in a recent interview opened up about his and Blake Lively's fourth baby and maintained that he would love to become a girl dad again. Speaking about why he hopes it will be a baby girl again, the actor spoke to Today and added both as a father to three girls and as youngest of three brothers himself, "I love my well-being and my home," he joked, teasing his siblings "were just arsonists and firemen."

On the work front, Ryan will be next seen in Deadpool 3 which marks the return of Hugh Jackman as Wolverine. The major news was announced in September as Ryan and Hugh featured in an announcement video. The film is being helmed by Free Guy and The Adam Project director Shawn Levy. Deadpool 3 is set to release in November 2024.