Priyanka Chopra and Lilly Singh have been good friends for years now and there is no doubt about that. Today, the Baywatch star wished Singh on her birthday. Read details. Priyanka Chopra wishes YouTuber Lilly Singh on her birthday with a sweet message.

The impeccable bond of friendship between Hollywood actress Priyanka Chopra and YouTuber Lilly Singh cannot be missed. Both of them have, time and again, redefined what friendship goals look like and in a positive direction. From Priyanka Chopra featuring in one of Lilly's YouTube videos to Lilly attending a grand Diwali party at Priyanka and Nick Jonas's LA home, they both leave no moment to strengthen their friendship.

On October 26, Lilly Singh turned a year older. Taking to Instagram to wish the now 34-year-old Lilly Singh, Priyanka Chopra wrote, “Happy Birthday to my fellow Punjaban @lilly. Have the best day ever….balle balle baby” along with a bunch of heart emojis. 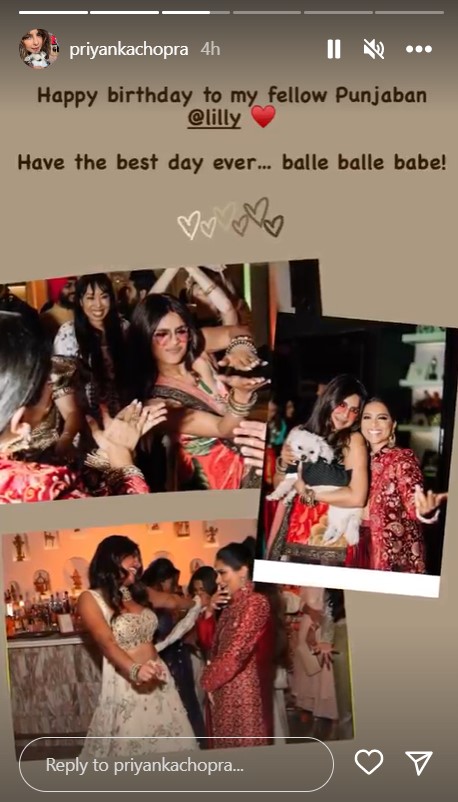 For the unversed, Canada-born Lilly Singh (whose parents are of Indian origin) became famous as a YouTuber from Canada who started making her videos under the pseudo name of Superwoman. In 2010, she started her YouTube journey and soon became an internet sensation with lakhs of views on her social media channel. Lilly later started her own chat show, A Little Late With Lilly Singh with NBC which ran for two seasons.

While her professional journey has been extremely successful, her entry into the fashion world was equally appreciated and lauded by several fashionistas across the globe. She is often credited for making gender-fluid fashion so popular.

Work-wise, Priyanka Chopra, will next be seen in the romantic drama 'It's All Coming Back To Me' opposite Sam Heughan and Celine Dion. She will star alongside Richard Madden in Amazon Prime Video's thriller series Citadel and as the spiritual guru Ma Anand Sheela in director Barry Levinson's Sheela.

Being a Bollywood actress as well, Priyanka will next be seen in director Farhan Akhtar's directorial Jee Le Zaraa alongside Katrina Kaif and Alia Bhatt as well.

Also Read: Priyanka Chopra shares PIC with Malti and her father; Says 'It's always Daughter's Day in my book'