JTBC releases the poster of the upcoming K-drama The Interest of Love’ starring Yoo Yeon Seok, Moon Ga Young, Keum Sae Rok, and Jung Ga Ram which is all set to release on December 21, 2022, The upcoming JTBC drama called the ‘Interest Of Love,’ will be an intriguing love story based on four characters stuck in a chaotic love square. Recently in the limelight for its first teaser video, the upcoming Wednesday-Thursday drama is once again buzzing in the K-drama world for the release of its poster.

Upcoming K-Drama: The Interest of Love

The show features Ha Sang Soo whose role will be played by Yoo Yeon Seok and Ahn Soo Young who will be played by Moon Ga Young, who will be seen caught up in a precariously emotional relationship. The upcoming show will be full of emotions and showcase a gripping drama as its lead characters discover the meaning of true love amidst a complicated love square. Directed by Cho Young Min, the upcoming show The Interest of Love', is all set to broadcast this December 2022.

The emotional K-drama starring Yoo Yeon Seok in the role of Ha Sang Su, Moon Ga Young as Ahn Soo Young, Keum Sae Rok as Park Mi Kyung, and Jeong Ga Ram as Jeong Jong-hyun will be all about the chemistry between the exciting cast. The K-drama will feature a dangerously addictive office romance that will definitely keep you glued to your screens. 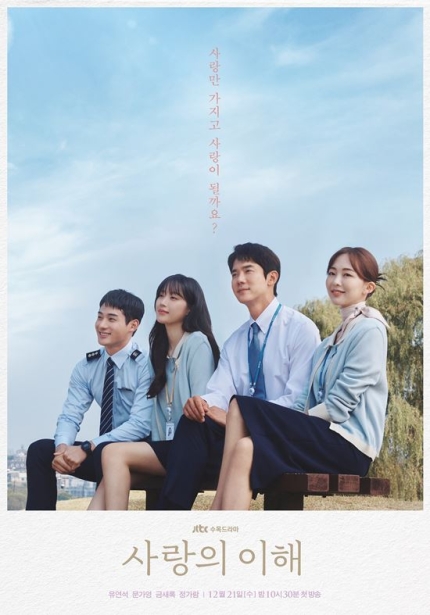 The latest poster of the show features the four actors sitting in uniforms on a bench under a clear sky; each wearing a slightly different version of the uniform that signifies a different rank and more drama. Clearly, the show will be full of romance and messy situations that will make it all the more engaging. 'The Interest of Love' will be a heart-throbbing romantic K-drama that will first broadcast on the 21st of December 2022, at 10:30 PM on JTBC.

Can We Be Strangers? and The Interest Of Love gain...