Indian cricketer Shubman Gill and Bollywood diva Sara Ali Khan's dating rumors are yet again hitting the headlines, and this time, the cricketer's comment on a chat show has left the town talking. Bollywood diva Sara Ali Khan is among the top-notch actresses in the entertainment world and has a massive fan following who root for her. Not only her acting prowess but her good looks and fashion sense have also been applauded by her fans. Lately, Sara's love life has been making it into the headlines and grabbing a lot of attention. For the unversed, the diva is rumored to be dating popular Indian cricketer Shubman Gill, and there have been several times that the two were spotted together and became the talk of the town.

Speaking about Sara Ali Khan's past relationship, the actress was previously dating her Love Aaj Kal co-actor Kartik Aaryan. However, their relationship went kaput, and the actress was vocal about it in Koffee With Karan Season 7. On the other hand, Shubman was also in the headlines for his previous relationship. For the uninformed, the speculations of Shubhman Gill dating cricketer Sachin Tendulkar's daughter Sara Tendulkar were doing the rounds for many years now. But later, the speculations of Shubman and Junior Tendulkar breaking up grew stronger when fans noticed that they have both unfollowed each other. Soon after this, Shubman and Sara were seen together, and since then the rumors of their relationship have grabbed eyeballs.

In August 2022, Sara and Shubman grabbed the headlines after the two were spotted having dinner at a restaurant. This was the first time when both were seen together on a dinner date. The video, shared by TikToker Uzma Merchant (@uxmiholics), showed Sara Ali Khan and Shubman Gill at Bastian, Mumbai, placing an order with a waiter next to their table. This viral video added fuel to their dating rumours, and fans of both celebrities were surprised to spot them together.

Sara and Shubman in Delhi

In October 2022, Sara Ali Khan and Shubhman Gill were spotted exiting a hotel in Delhi and this again confused their fans.

Sara and Shubman boarding the flight together:

In October 2022, another video of Sara Ali Khan and Shubman Gill grabbed eyeballs when both boarded the same flight together. In the viral video, it was seen that Sara was clicking selfies with her fans and then sitting next to Shubman Gill as they boarded the flight together. As soon as the videos went viral, Sara and Shubman's fans were convinced that the duo are dating each other.

Shubman, who celebrates his birthday on 8th September, received a special wish from his friend, which again caught the attention of his fans. Shubman's friend Khushpreet Singh Aulakh took to his Instagram to wish him the cricketer on his birthday. Khushpreet posted several pictures with Shubman, but the caption was the highlight. In his caption, he wished Shubman ‘bahut SARA pyaar’. The caption read, “Happiest birthday to My Main Man , The OG , Annoying and the google graduated baby But honestly My life would suck without you I hope God will bless you with more success, excuses , google knowledge and bhut SARA pyaar from everyone.” This post went super viral and fans were convinced that something is brewing between the two. 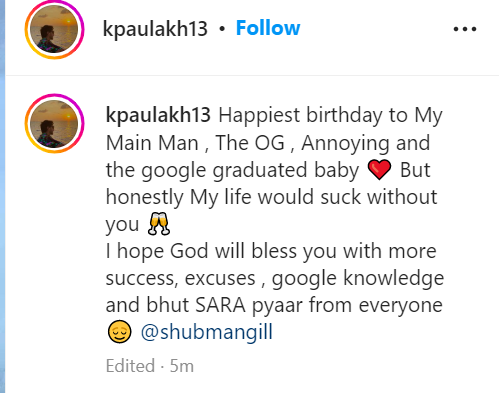 Now, Shubman Gill graced a chat show, Dil Diyan Gallan, hosted by Punjabi actress Sonam Bajwa and made a statement that has got the town talking. Sonam Bajwa questioned the young cricketer if he is dating Sara Ali Khan, to which Shubman replied, "Maybe." Probing further about it, Sonam said "Sara ka sara sach bolo" and blushing over her statement, Shubman smilingly said, "Sara da sara sach bol diya. Maybe, maybe not.” Well, this statement has definitely created a buzz on social media and fans are going frenzy to know about the real status of Shubhman and Sara's relationship.