Amitabh Bachchan’s granddaughter Navya Naveli Nanda is a star in her own right. While Navya has expressed that she doesn’t wish to foray into Bollywood, she has been making waves on social media recently after she announced her very own podcast ‘What The Hell Navya’. A few days ago, Navya Nanda shared a video on her Instagram and announced her podcast, while also revealing that she will have real, witty and deeply personal conversations with some very special guests. Now, the trailer of What The Hell Navya has released, and joining the party of unplugged conversations are legendary actor, member of parliament, and Navya’s ‘Nani’, Jaya Bachchan and Shweta Bachchan, an author, columnist, entrepreneur and Navya's mom.

This news was announced with a trailer reveal, which gives fans a sneak peek into what they can expect from the podcast. The trailer looks like a lot of fun with Navya, Jaya Bachchan and Shweta Nanda taking to the mic in their most candid avatars and indulging in frank, spontaneous and hilarious heart-to-heart chats. Abhishek Bachchan has now reacted to his niece's podcast, and reposting the trailer on his Instagram stories, he questioned why he has been left out. Sharing the video, Abhishek Bachchan wrote, “What the hell Navya!! Why have I been left out? @navyananda.” Check out his Instagram story below. 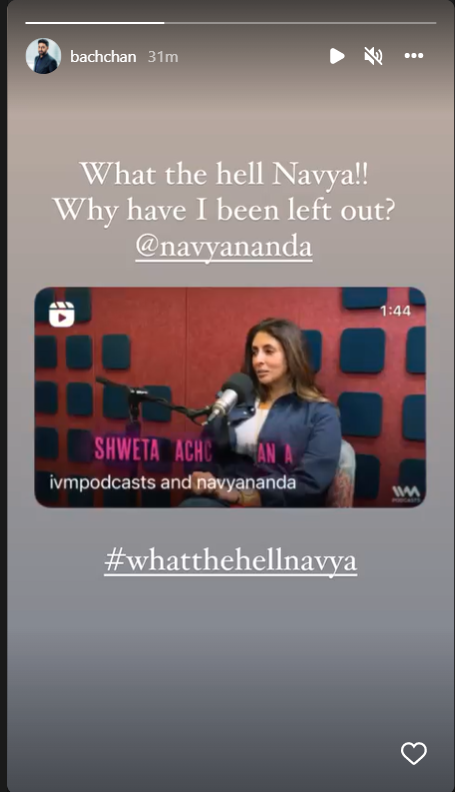 The trailer shows Navya Nanda candidly sharing that she has a problem saying no, to which Shweta replied, “You better learn.” Shweta and Jaya Bachchan both agree that it’s the best word. Karan Johar also reacted to the trailer, and wrote, “Aunty J is the best,” along with laughing emojis. The podcast will premiere on September 24, and a new episode will be out every Saturday on IVM Podcasts.

For the unversed, Navya Naveli Nanda is an entrepreneur and leads Aara Health, a women-centric health tech company and Project Naveli, a non-profit for women.