Adipurush: Kriti Sanon to wake up early in the morning for THIS reason; wishes fans ‘Good night’

The team of Adipurush is going to drop a major announcement related to the film. Stay tuned!

Adipurush: Kriti Sanon to wake up early in the morning for THIS reason; wishes fans ‘Good night’ Adipurush: Kriti Sanon got to wake up in early in the morning for THIS reason; wishes fans ‘Good night’

Ever since Kriti Sanon’s starrer Mimi made her win several accolades for her performance in the film, there has been no turning back for this young Bollywood actor. Nowadays, she is busy promoting the two most-awaited films---Bhedhiya and Adipurush. She is playing lead roles in both these films. Fans can clearly see Kriti working day and night in a tightly wrapped-up schedule to match up to the requirements.

In a recent Instagram story shared by the Heropanti actress, we can see that she has put an alarm to wake up at 7 AM today morning to promote her upcoming film—Adipurush. Adding to the excitement, the much-anticipated teaser and first-look poster of the film is set to be unveiled on October 2, on the bank of Sarayu in the holy land of Ayodhya, Uttar Pradesh.

The grand event will be graced with the presence of the lead actors of the film--Prabhas and Kriti Sanon along with the director Om Raut and producer Bhushan Kumar. Two days ago, Om Raut confirmed the same in a social media post. He tweeted, “Our magical journey is now yours to experience & love! The much-awaited #AdipurushTeaser and the first poster of our film will be launched on Oct. 2! Venue - Bank Of Sarayu, Ayodhya, UP! #Adipurush releases IN CINEMAS on January 12, 2023 in IMAX & 3D!” He also shared pictures with Kriti and Prabhas in his post.

In view of this development, we are wondering whether Kriti has put this Instagram story to highlight that she will be travelling from Mumbai to Ayodhya today. Or a major announcement related to the film will be swept in? Well, only time will confirm about the same. 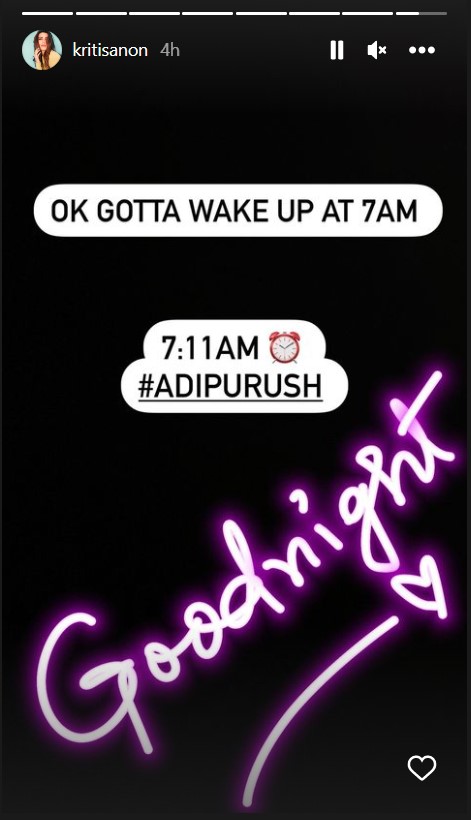 For the unversed, Adipurush is directed by National award-winning director, Om Raut. The film, features actors Prabhas, Kriti Sanon, Saif Ali Khan, and Sunny Singh in pivotal roles. The Outlook magazine reported that ‘Adipurush’ is based on the epic Ramayana, showcasing the victory of good over evil. This state of Uttar Pradesh is also the birthplace of Lord Ram, making the location much more relevant for this upcoming event. The poster, as well as the teaser, will reflect the scale of the film.

'Adipurush' is produced by T-Series and Retrophiles and is slated to release on January 12, 2023, at the theatres.