Suniel Shetty’s daughter Athiya Shetty and Indian cricketer KL Rahul are all set to tie the knot soon, and fans are eagerly waiting for their upcoming wedding. Pinkvilla reported that the couple has chosen to tie the knot at Suniel Shetty’s home, Jahaan in Khandala, in January. Ever since Athiya Shetty and KL Rahul made their relationship Insta-official in 2021, the couple has been treating fans with some adorable, love-filled pictures together. Their fans go gaga each time the couple is spotted together. KL Rahul and Athiya Shetty rang in New Year 2023 together in Dubai, and their pictures from the New Year bash went viral on social media. Now, Athiya’s brother Ahan Shetty has also shared a few pictures with KL Rahul, Athiya Shetty from the New Year party.

Ahan Shetty took to his Instagram account to post pictures from the New Year bash. The first picture shows him posing with his girlfriend Tania Shroff, and another friend. In the next picture, Ahan can be seen posing with Tania, and KL Rahul. The third one is a picture with his friend Vedant Mahajan, and if you look closely, Athiya Shetty and KL Rahul can be seen in the background. Sharing the snaps, Ahan wrote, “better late than never.” Check out the pictures below!

KL Rahul shares a great bond with Ahan Shetty, and they often share posts on each other’s special occasions. Recently, on Ahan Shetty’s 27th birthday, KL Rahul shared a picture of him, Athiya, and Ahan walking through the lawn. While Athiya and Ahan seemed engrossed in a conversation, the cricketer walked a little ahead. KL Rahul shared the picture on his Instagram story and wrote, “Happy birthday brother Ahan Shetty, this is your year." 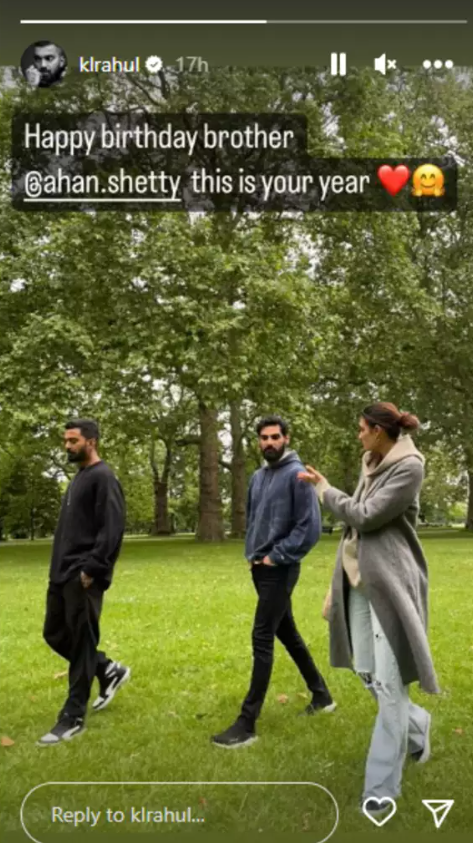 Meanwhile, KL Rahul also shared a series of pictures from his New Year celebration with Athiya Shetty, and simply captioned them, “2023.” Athiya and KL Rahul make for a dashing couple, and they can both be seen in black outfits in the pictures shared by the cricketer. While Athiya dazzled in a black satin outfit, KL Rahul looked dapper in a black shirt, matching blazer, and pants. Check out the pictures below.

Everything about KL Rahul and Athiya Shetty’s wedding

In December 2022, it was reported that KL Rahul took a leave of absence in January 2023, and that the Board of Control for Cricket in India (BCCI) approved it. Since then, reports of KL Rahul and Athiya Shetty’s January 2023 wedding took over the Internet. A source informed Pinkvilla that the lovebirds will celebrate their wedding events from 21st to 23rd January 2023, and that they will tie the knot at Suniel Shetty’s home in Khandala, which stands amidst plush greenery.

ALSO READ: KL Rahul- Athiya Shetty to tie the knot in Khandala: Here’s a complete timeline of their relationship

Tania Shroff shares an unseen PIC with BF Ahan, At...