Padma Award recipient Ajay Devgn on Monday announced that he is collaborating with filmmaker Neeraj Pandey for his upcoming film. Details inside. Padma Shri recipient, who also won the National Film Award in the Best Actor category recently, Ajay Devgn, is roaring under success these days. He is best known for his works in films like Singham, RRR, Tanhaji: The Unsung Warrior, and Diljale to name a few. In 2008, he debuted as a film director with U Me Aur Hum and later went ahead to pursue his career in acting. However, he always believed that he enjoyed the process of directing. Keeping his passion alive for directing alive, he has dropped a fresh announcement related to his career progression.

Ajay Devgn, on Monday, informed his fans he will soon commence filming for his next movie with filmmaker Neeraj Pandey. The Tanhaji actor also informed us that his film will release at a global level in cinemas on June 16, 2023.

In a tweet on Monday evening, Devgn wrote, “@neerajpofficial and I are going to start our film together soon. And, this one will release worldwide in cinemas on June 16, 2023.” 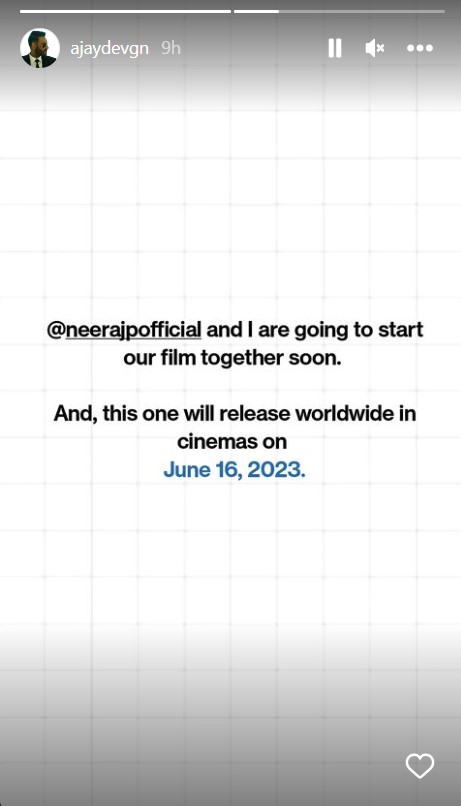 Ajay Devgn to work with Neeraj Chopra for the film Chanakya?

Sources close to news agency Press Trust of India informed that the film will be based on the life of Chanakya. Historically speaking, Chanakya was the royal advisor to Mauryan Emperor Chandragupta.

In February 2020, Pandey had spoken in detail about this project with PTI. He confirmed PTI that “the film was in pre-production and gearing to go on floors. The project got delayed due to the COVID-19 pandemic.”

Meanwhile, as far as Devgn’s career progression is observed, 2022 has been quite a rewarding year for him as an actor. While he got a national award for his film Tanhaji, he also made his debut on the OTT platform this year with the web series Rudra on Disney+ Hotstar. He was also seen in Alia Bhatt's starrer Gangubai Kathiawadi and RRR (film) for which his characters in the film were widely appreciated.

Looking ahead, Devgn is currently looking forward to the release of Drishyam 2. He also has "Kaithi" remake "Bholaa" on his platter.