Alia Bhatt celebrated National Cinema Day today with her darling sister Shaheen Bhatt. Alia is quite active on social media. Every now and then, she shares glimpses of her personal and professional lives on Instagram, while fans keep on coming back for more. From candid selfies with friends and family to behind-the-scenes clips from shoots, she shares it all on her social media handle. Keeping up with this trajectory, tonight, she also treated netizens to a sneak peek of how she celebrated National Cinema Day. Scroll down to find out.

A few hours back, the official Instagram handle of Alia’s production company, Eternal Sunshine Production took to the ‘gram and dropped an adorable video featuring the mommy-to-be with her sister Shaheen. In the video, both the Bhatt sisters can be seen seated on the floor in a dark room, with their backs to the camera. They can be seen watching the beginning credits of Alia’s film Darlings, which showcases a cat as part of the cute animation of her production house. Alia and Shaheen can be seen vibing to the music as they exchanged a glance and cheered their beverage. 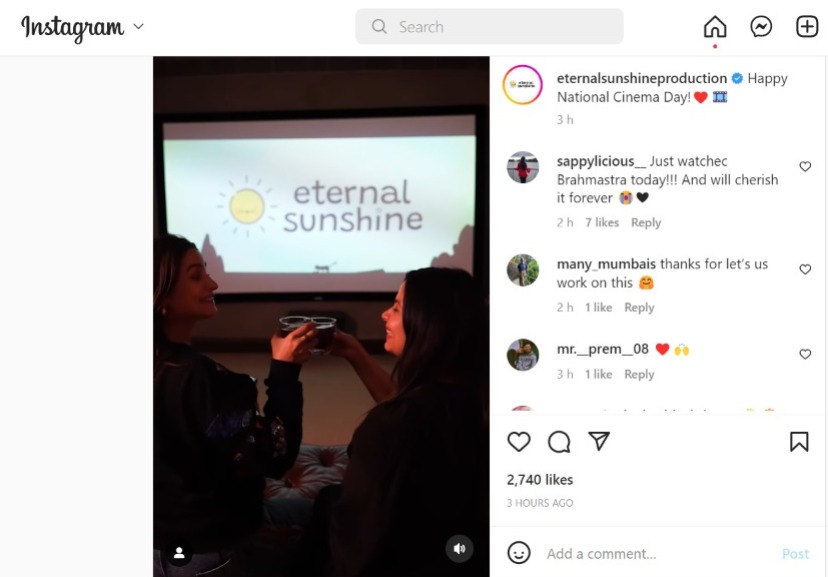 In an EXCLUSIVE conversation with Pinkvilla, Brahmastra actors Ranbir Kapoor and Alia Bhatt revealed their take on commercial success V/s critical acclaim. While Ranbir said that the box office numbers have been the biggest reward for him, Alia maintained that she wants to be loved and remembered. “That only happens if your films connect and hit the hearts. And there is like a certain love and it leaves a stamp on people’s hearts. Whether that’s critics or the audiences or anybody. I think that’s something that I always wanted. Both the film and I should get the love. So, you don’t compare between the two,” she said.

“Recently I was asked to choose between an award and a great review – and I said 300 Crores at the box office. And ironically, we have hit 360 worldwide gross. So, love is eventually the greatest response you can get to a film,” Alia Bhatt added. Anonymous
Sep 24, 2022 05:03 PM
Haven\'t u got any other better news to advertise than these two dumps. U must b desperate Pinkvilla, fir money n fame. Sick!
0 REPLY Bride Alia Bhatt’s pics with Shaheen Bhatt from me...