Alia Bhatt glows in yellow Anarkali as she poses with Shaheen Bhatt and others at her baby shower; PIC

Check out first picture of mom-to-be Alia Bhatt ahead of her baby shower ceremony.

Alia Bhatt glows in yellow Anarkali as she poses with Shaheen Bhatt and others at her baby shower; PIC Alia Bhatt glows in a yellow Anarkali as she poses with Shaheen Bhatt and her girls; PIC

Alia Bhatt and Ranbir Kapoor, who are one of the most loved couples in Bollywood, are expecting their first child. The actress is having her baby shower ceremony today. Family members and friends have started arriving for the function. Alia’s sister Shaheen Bhatt, mother-in-law Neetu Kapoor, Ranbir's sister Riddhima Kapoor Sahni, late Shammi Kapoor's wife Neila Devi and others were spotted arriving at their home Vastu. It is also the same place where Alia and Ranbir’s wedding took place in April. Ahead of the function, Anushka Ranjan, who is the best friend of Raazi actress, took to her Instagram handle to share the first picture of the mother-to-be from her ceremony.

Anushka Ranjan took to her Instagram stories and shared a picture of Alia Bhatt and her girl gang posing in style. Alia looked like a ray of sunshine in an all-yellow attire. She donned a bright yellow suit and a yellow dupatta with a golden border. She left her hair open and wore a golden chocker necklace and maang tika with minimal makeup. Alia completed her look with golden flats. Next to her stood her sister Shaheen Bhatt who looked pretty in a Pink suit and sheer dupatta and Anushka who stunned in a blue kurta and white cigarette pants. We have to admit that the pregnancy glow on Alia’s face is unmissable. 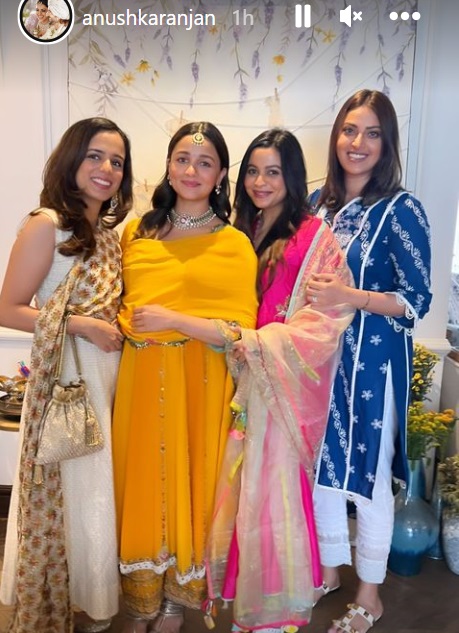 Meanwhile, on the work front, the trailer of Alia’s Hollywood debut Heart Of Stone starring Gal Gadot was released and it has created a lot of hype. Apart from this, the actress will also be seen in Karan Johar’s Rocky Aur Rani Ki Prem Kahani alongside Ranveer Singh. The team wrapped up the shooting of the film earlier this year. This film also stars Shabana Azmi, Jaya Bachchan and Dharmendra. Also, Alia is currently basking in the success of her recently released movie Brahmastra alongside Ranbir Kapoor which has broken several box-office records.

ALSO READ: Ranbir Kapoor says he is ‘very dependent’ on Alia Bhatt; Doesn’t bathe or eat if he doesn’t know where she is