Alia Bhatt and Ranbir Kapoor, who got married in April 2022, are currently enjoying a new phase of their lives. In November 2022, the couple welcomed their first baby girl Raha. Recently, the duo was seen enjoying a walk with their princess. Meanwhile, on Tuesday night, the new parents in town were seen enjoying a family get-together. Neetu Kapoor and Karisma Kapoor took to Instagram and shared pictures from their fam-jam. Saif Ali Khan and Kareena Kapoor Khan too joined the family get-together.

On Wednesday afternoon, Neetu and Karisma shared pictures from their family reunion. The Kapoor clan came together for a cozy dinner night. Neetu took to her Instagram story and shared two pictures from the family gathering. The first picture features the Kapoor ladies including Alia, Karisma, Kareena, Shweta Bachchan, Navya Naveli Nanda, Samaira and others. Along with it, Neetu put a 'Family love' sticker. The second picture featured the entire Kapoor clan including Ranbir, Saif, Aadar Jain and others. In the pictures, Alia is seen sporting a red top with black trousers while Bebo has opted for an all-black look. Have a look: 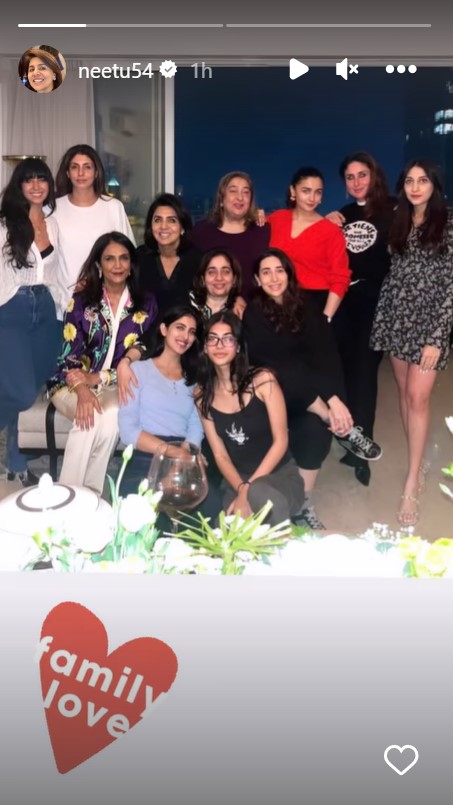 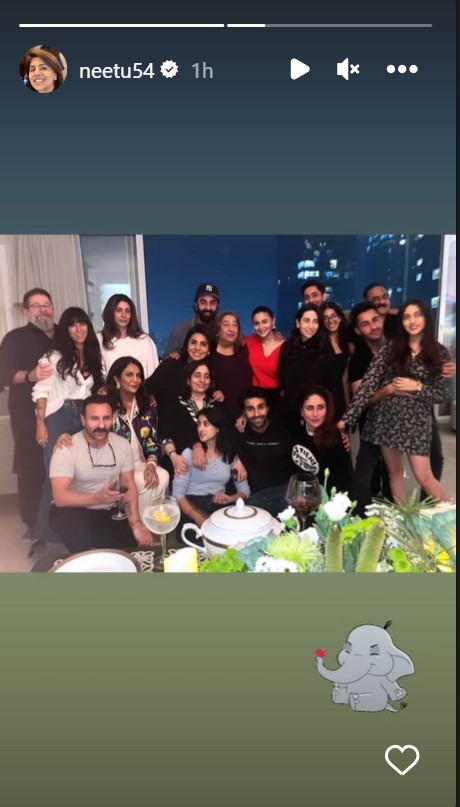 Karisma too shared a bunch of pictures on her handle. In the pictures, Karisma is seen posing with Alia, Ranbir, Bebo and Saif. She also posted a family picture that dished out major 'hum saath saath hai' goals. Along with the pictures, she wrote, "Fam Jam always the best  #familylove."

Alia and Ranbir were last seen in Brahmastra together. After the arrival of her baby girl, Alia will be seen in Rocky Aur Rani Ki Prem Kahani with Ranveer Singh. She also has Jee Le Zaraa with Katrina Kaif and Priyanka Chopra. The new mommy will be making her Hollywood debut with Heart of Stone alongside Gal Gadot. On the other hand, Ranbir has Animal with Rashmika Mandanna, Anil Kapoor and Bobby Deol. The first look was launched on 31st December 2022, and it has got Ranbir's fans quite excited. He will be also seen in Tu Jhoothi Main Makkaar with Shraddha Kapoor. The Luv Ranjan directorial also stars Boney Kapoor and Dimple Kapadia.

ALSO READ: PICS: Ranbir Kapoor and Alia Bhatt make their first appearance with daughter Raha as they take her for a walk

Anonymous
Jan 19, 2023
He will have to rely on wifey income while the flops keep coming and he smokes his life away.
0 REPLY