Ananya Panday winds up her vacation as she bids goodbye to Rome; SEE

Ananya Panday, who was recently giving major vacation goals by posting photos from picturesque locations, has now turned off her vacation mode.

Ananya Panday winds up her vacation as she bids goodbye to Rome; SEE Ananya Panday, who was recently posting photos from picturesque locations in Italy, has now turned off her vacation mode.

Bollywood actress Ananya Panday made her debut in the Bollywood film industry in 2019 in the film Student of the Year 2 which was produced under the banner of Dharma Productions. Since then, there has been no looking back in her career. Ananya went on to showcase her talent in a comedy film titled Pati Patni Aur Woh. These performances earned her several accolades for Best Female Debut.

Recently, she played the titular role in the film Liger along with South Indian actor Vijay Deverakonda. With a couple of more projects lined up ahead, Ananya did not shy away from taking a break by jetting off to Italy. Over the last few days, Ananya shared a bunch of pictures of her vacation in the country from picturesque locations.

In Ananya‘s recent post on Instagram, one can see the diva looking drop-dead gorgeous in a pink dress as she poses in front of the famous monument, the Colosseum. The next is a video of her riding the electric bike on the streets of Rome. The actress exuded a touristy vibe as she roamed around the beautiful city.

In the latest update about her trip to the touristy location, Ananya has now informed her fans that she has decided to switch off her vacation mode from Rome at the moment. Whether she will jet off to another city for vacation, we don’t know. Only time will tell about the developments. 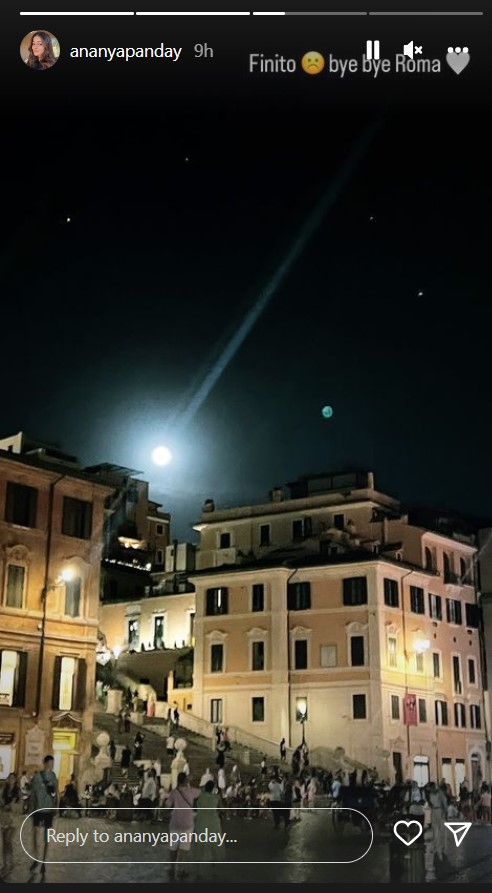 Meanwhile, as far as Ananya Panday’s career progression is concerned, she was last seen in the film Liger. Directed by Puri Jagannadh, this pan-India movie saw actors Vijay Deverakonda and Ramya Krishnan in titular roles. This film hit the theatres on August 25 this year. Though the film did not perform well at the box office, the music of the film was appreciated by the masses.

Ananya will next be seen in Arjun Varain Singh directorial Kho Gaye Hum Kahan with Siddhant Chaturvedi and Adarsh Gourav. In an exclusive interview with Pinkvilla, the actress mentioned that she is in talks for three projects, she can't speak much about. Let’s see how time unfolds for the young budding actor.

Also Read: Ananya Panday channels her inner kid on the streets of Rome and shows what her dreams are made of; PICS