The actress will be next seen in Dream Girl 2 and was in Mathura recently for the shoot. Ananya Panday was last seen in Liger co-starring Vijay Deverakonda. The film flopped at the box office. However, she was criticized by the moviegoers for her acting. Meanwhile, the actress loves to keep herself fit too. She never misses a chance of going to the gym but she loves doing Yoga more. She shares a lot of pictures from the classes. Even the actress is often spotted exiting yoga classes. Today also, she shared an update on her Instagram stories.

Sharing her Instagram stories, Ananya wore black shorts and a grey tee with ‘Sloth Yoga’ written on it. She kept her hair tied in a bun style. With no makeup, the Gehraiyaan actress flaunted her blemish-free skin. She was happy posing for her trainer. Anushka wrote, “When a sloth turns up on Monday.” To note, the actress has recently announced her new project Dream Girl 2 co-starring Ayushmann Khurrana. The film is releasing next year. 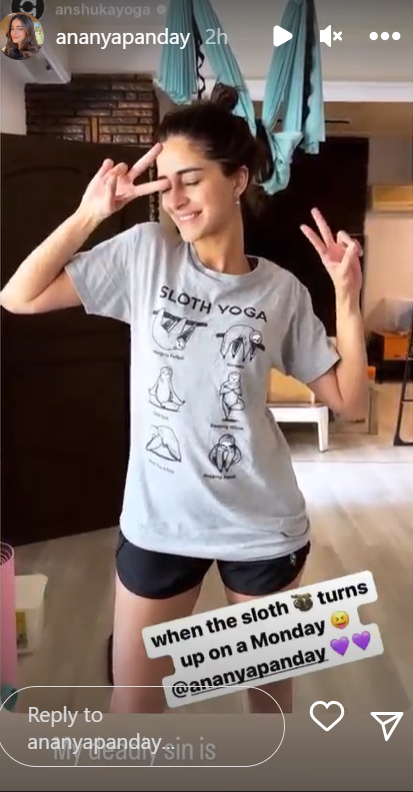 On the work front, Ananya will be seen in Kho Gaye Hum Kahan. It will also feature Siddhant Chaturvedi and Adarsh Gourav. It is written by Zoya Akhtar, Reema Kagti, and Arjun Varain Singh. The actress recently collaborated with Ranbir Kapoor. However, details of the same are not out yet.