Anil Kapoor made a guest appearance in Amitabh Bachchan and Dilip Kumar starter. Anil Kapoor is one of the most versatile actors in Bollywood. He started his career with a small role in Hamare Tumhare but got his recognition from the film Meri Jung. Well, since then there was no looking back and he delivered many hits at the box office. During this long journey, he got a chance to work with many celebrated actors including Dilip Kumar and Smita Patil. We are talking about his film Shakti which has completed 40 years today. The JugJugg Jeeyo actor got nostalgic and shared film scenes on his social handle.

Sharing the pictures, the actor wrote, “40 years of Shakti .. remembering Yusaf Saab / the great Dilip Kumar, Smita Patil who was so kind and generous during the shooting and the producers Mushir and Riyaz...” It is a collage of different scenes. In one scene we can see Anil saying goodbye from the train while in another he is seen meeting Dilip Kumar and Smita Patil. To note, in the film Shakti, Anil made a guest appearance. He was seen in the role of the grandson of Dilip Kumar and Amitabh Bachchan. Big B played the role of Dilip Kumar’s son.

The film was directed by Ramesh Sippy and was a crime drama movie. It was released in 1982 and stars Dilip Kumar, Amitabh Bachchan, Rakhee Gulzar, Smita Patil, Kulbhushan Kharbanda, and Amrish Puri. 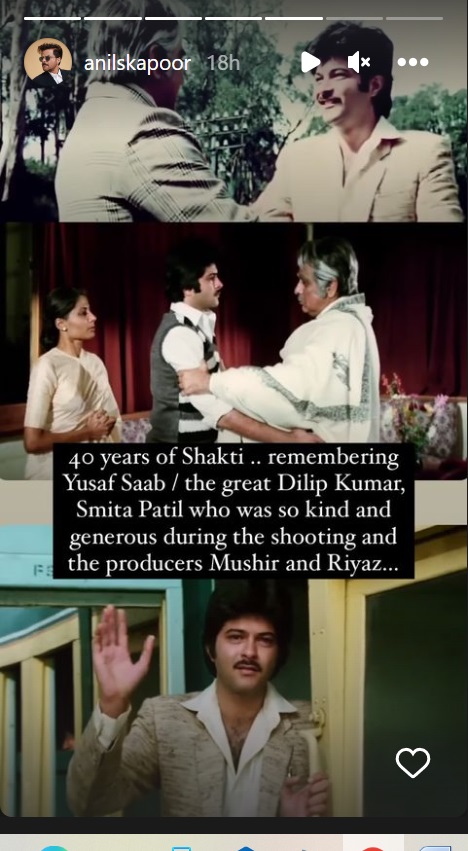 The movie won four Filmfare Awards. On the work front, Anil Kapoor was last seen in JugJugg Jeeyo which also starred Varun Dhawan, Kiara Advani, and Neetu Kapoor. He will be next seen in the Indian remake of 'The Night Manager'. It is an espionage thriller. The shooting is completed. He also has Animal with Ranbir Kapoor and Rashmika Mandanna in his kitty.