Anil Kapoor shares PHOTO collage as Welcome clocks 15 years; Calls it one of his most cherished films

Anil Kapoor’s character Majnu in the film was very popular among the fans. The comedy entertainer Welcome starring Akshay Kumar, Katrina Kaif, Anil Kapoor, and Nana Patekar has completed 15 years today. Released in 2007, the film also starred Feroz Khan, Mallika Sherawat and Paresh Rawal in prominent roles. Directed and co-written by Anees Bazmee, it was a huge success at the box office. Today, as it completed 15 years, Anil Kapoor shared a collage of pictures on his social handle along with a special note. He called it one of his most cherished films.

Anil Kapoor’s Instagram
Taking to his Instagram stories, Anil wrote, “15 years ago Majnu bhai picked up the paintbrush and the rest is history! #Welcome was, is and always will be one of the my most cherished films for the sheer joy it has brought people! It’s amazing how some stories & characters just live on even years later…Thank you for giving #Welcome & Majnu Bhai so much love! The picture shows late actor Feroz Khan, Akshay Kumar and Nana Patekar. The film’s sequel Welcome Back was released in 2015 and it also became a commercial success. 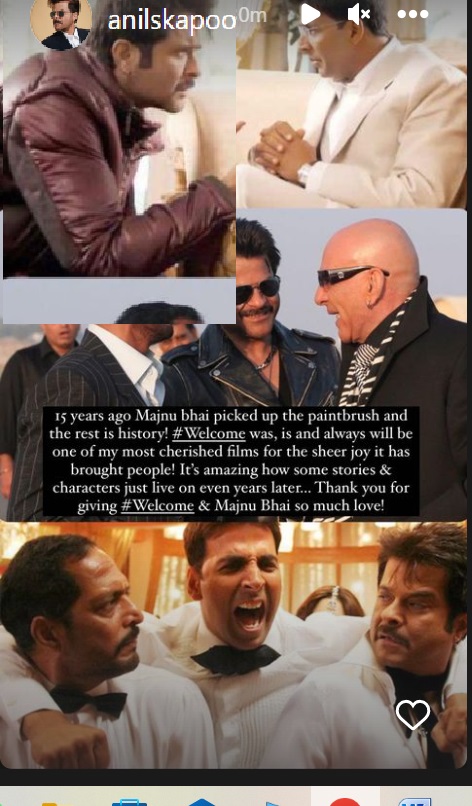 Welcome:
The story is about two gangsters (Anil and Nana) who meet Rajiv (Akshay), who belongs to a respectable family and want to fix their sister's wedding with him. However, when Rajiv's uncle refuses the match, a series of hilarious situations occur.

ALSO READ: EXCLUSIVE: Anil Kapoor wants to work with Rishab Shetty; Has a special request for the Kantara star