Arjun Kapoor and Bhumi Pednekar are all pumped up for their 'second film in a row'; PIC

Arjun Kapoor and Bhumi Pednekar will be seen together in The Lady Killer. A file image of Bhumi and Arjun

Arjun Kapoor and Bhumi Pednekar are currently in Glasgow, the UK shooting for their next film. Well, the details of the film are not shared till now but the lead actors are keeping fans updated through pictures. As per reports, in the untitled romantic comedy features, both have entertaining roles. The latest report is that this project is set to be directed by Mudassar Aziz. Recently, they also shared a picture with Rakul Preet Singh and Jackky Bhagnani. To note, Arjun and Bhumi will be seen in The Lady Killer.

Talking about the picture, Arjun shared a selfie picture with Bhumi on his Instagram stories and wrote, ‘Issa 2nd film in a row vibe’. Both are twinning in black and are looking extremely happy. The same picture was shared by Bhumi also on her social handle. Talking about the film, The Lady Killer, it is a suspense drama thriller that follows the romance of a small-town playboy (Arjun Kapoor) and a self-destructive beauty, played by Bhumi Pednekar. It is directed by Ajay Bahl.

Recently, Arjun also shared sun-kissed photos on his Instagram handle. He is seen posing in the daylight and the caption read, “नयीं Film नयीं Vibe followed by a face emoji.” 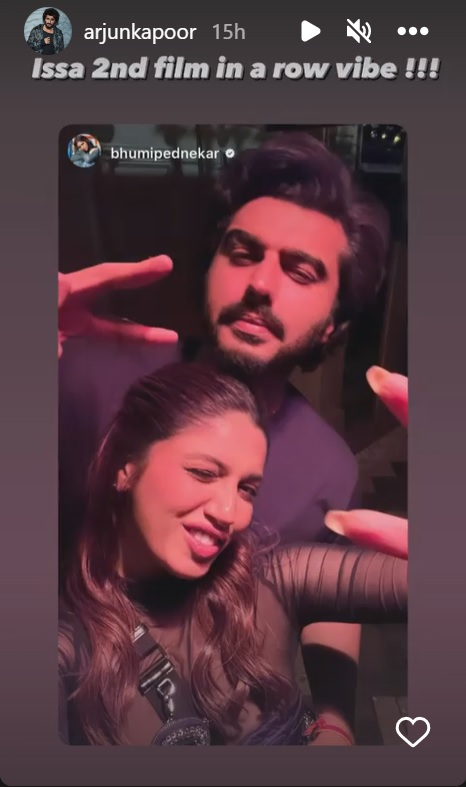