Alia Bhatt shared the first look of her Hollywood debut action thriller Heart of Stone. The actress will be seen sharing screen space with Gal Gadot and Jamie Dornan.  It's directed by Tom Harper, who previously made 2019's The Aeronauts. The video features footage from the film and several behind-the-scenes glimpses of the high-octane action sequences. Alia will be essaying the role of Keya Dhawan, in the video, she can be heard saying, “It has these characters that you’d really connect and feel for."

Sharing the video teaser and introducing her character ‘Keya Dhawan’, Alia wrote, “The first look of Heart Of Stone and Keya coming to Netflix in 2023 #Tudum”. Apart from Alia, Gal and Jamie, the film also stars Sophie Okonedo, Matthias Schweighöfer, Jing Lusi, and Paul Ready. The film will release on Netflix next year. Reacting to the Heart Of Stone's first look, Arjun Kapoor, who starred in 2 States with Alia, reacted to the video in the comments section and wrote: "It’s a biggish proud." He also re-shared the video on his Instagram story.

In May, Alia jetted to London to film Heart Of Stone and as she left for the shoot, the Gangubai Kathiawadi actress shared a selfie and wrote, "And off I go to shoot my first ever Hollywood film!!!! Feel like a newcomer all over again - sooooo nervous!!!!Wish me luckkkkkk. The actress shot for the movie during her pregnancy and she shared the news on Instagram in June during her stay in London for the film's shoot.

Apart from Heart of Stone, the Student Of The Year actress has several projects in the pipeline. She will be seen in Karan Johar's Rocky Aur Rani Ki Prem Kahani with Ranveer Singh and Farhan Akhtar's Jee Le Zaraa with Priyanka Chopra and Katrina Kaif. 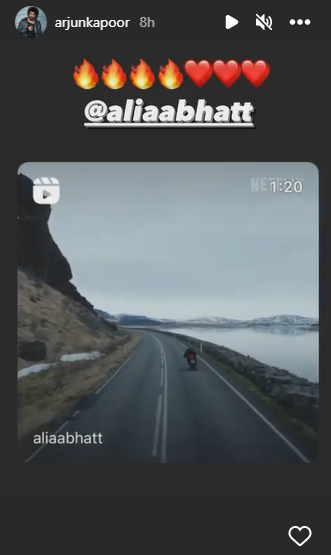