Arjun Kapoor jets off to Dubai for his next film, misses Parineeti Chopra in flight for THIS reason

Arjun Kapoor, who will be seen in The Lady Killer and Kuttey next, has took a flight to work on his next film. However, the name of the film is not disclosed yet.

Arjun Kapoor jets off to Dubai for his next film, misses Parineeti Chopra in flight for THIS reason Arjun Kapoor, who will be seen in The Lady Killer and Kuttey next, has took a flight to work on his next film.

Arjun Kapoor and Malaika Arora not only exude a lot of love and power but also make sure that they remain committed on their respective work fronts. Recently, the duo attended the marriage ceremony of their best friends and fashion designers Kunal Rawal and Arpita Mehta. They both played the role of ladkiwaale as well as ladkewaale with ease and comfort. With the festivities now nearing completion, the B-Town couple have shifted their attention back to work. While girlfriend Malaika is attending various fashion events, the Gunday actor has now jetted off to Dubai for working on his next film.

Taking to Instagram, Arjun in his story shared a few hours ago wrote, “EN ROUTE. Film number #19” and shared a photo of his passport and tickets to Dubai. Earlier on Sunday evening, Arjun was spotted at Mumbai airport.

While heading for his work, Arjun Kapoor recalled his film ‘Sandeep Aur Pinky Faraar’. This film was released last year featuring Arjun and actress Parineeti Chopra in lead roles. “Look who I met on flight @parineetichopra,” Arjun wrote today morning while being seated in his plane and shared this caption while watching in-flight movies. 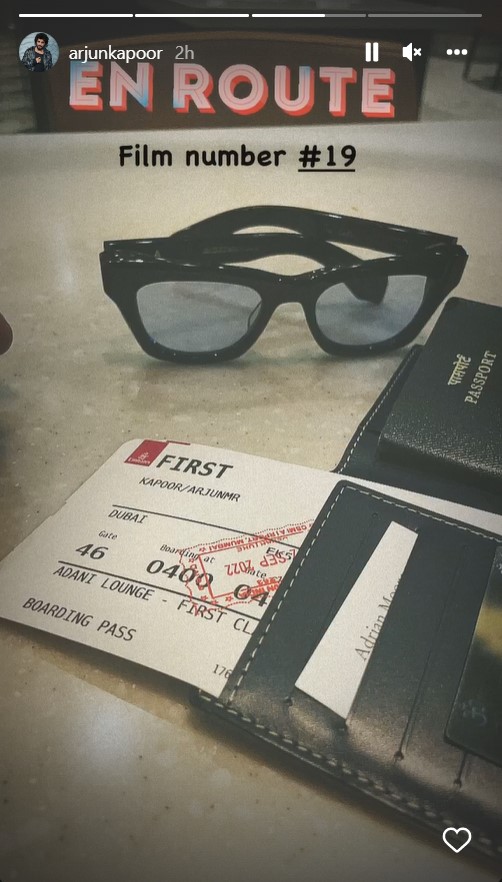 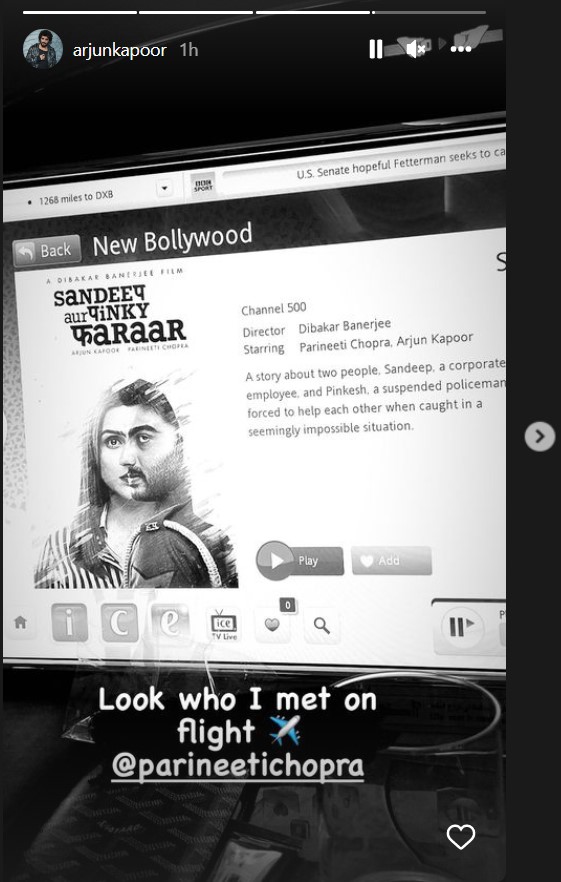 However, Parineeti is yet to respond to her Ishaqzaade co-star.

Directed and produced by Dibakar Banerjee with distribution by Yash Raj Films, Arjun Kapoor and Parineeti Chopra starred together for the third time in Sandeep Aur Pinky Faraar in lead roles. Prior to this, they worked together in Namaste England and Ishaqzaade.

Meanwhile, on the work front, Arjun was recently seen in Mohit Suri's Ek Villain Returns alongside John Abraham, Tara Sutaria, and Disha Patani. After this, Arjun Kapoor will be seen in The Lady Killer alongside Bhumi Pednekar. Then, the actor will also star in Aasmaan Bhardwaj's Kuttey with Tabu, Konkona Sen Sharma, Radhika Madan, Naseeruddin Shah and Kumud Mishra.