Athiya Shetty and KL Rahul tied the knot on January 23 in the presence of close friends and family at Suniel Shetty’s Khandala bungalow. Athiya Shetty and KL Rahul tied the knot on January 23 in the presence of close friends and family at Suniel Shetty’s Khandala bungalow. Their wedding festivities had begun a couple of days before and everything finally ended last night after the lovebirds got hitched for life. Athiya and Rahul’s dreamy pictures broke the internet and fans have been gushing over the two. In fact, these two also look super happy and the glow on their faces is proof of their happiness. Well, Arjun Kapoor’s sister Anshula Kapoor who was a part of the wedding ceremony shared a picture with the newlyweds and it appears to be from their wedding afterparty.

Anshula Kapoor took to her Instagram stories to share a collage of several pictures. These pictures appear to be from Athiya Shetty and KL Rahul’s wedding afterparty. From making goofy faces to hugs and kisses we can see them striking a lot of poses. Anshula can be seen wearing black attire and looks cute as Athiya Shetty kisses and hugs her. Athiya can be seen dolled up in a red outfit with silver embroidered work on it. She tied her hair in a single ponytail, wore a silver choker and her mangalsutra too can be seen around her neck. KL Rahul on the other hand looked dapper in a white tee. 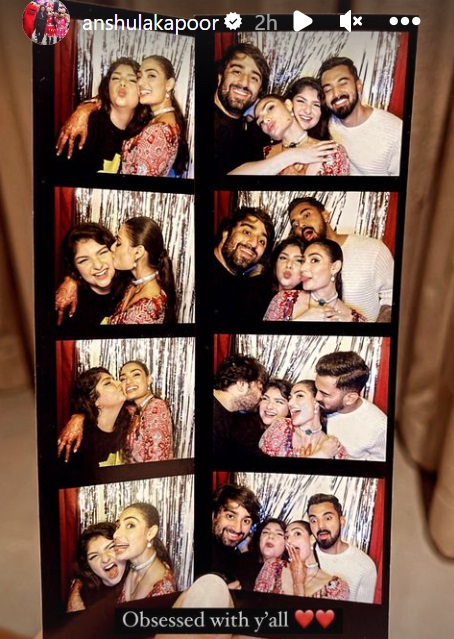 On being asked about when the wedding reception will be held, Suniel Shetty was quoted saying, ‘Reception will be held post IPL.’ For the unversed, Indian Premier League 2023 has been scheduled between April 1-June 4. Well, it looks like the newlyweds will be taking a long break before throwing a grand reception party.

As reported the lovebirds have tied the knot in the presence of nearly 100 guests which consists of close friends and family. Not many big Bollywood names were present at the ceremony but it is said that the couple will be hosting a lavish reception ceremony later in Mumbai. Reports also suggest that the couple had opted for a 'no phone policy' at their wedding. During the wedding, everyone's phones were said to be taken away.

ALSO READ: Katrina Kaif has a lovely wish for the newlyweds Athiya Shetty and KL Rahul; Find out

Anonymous
Jan 24, 2023
face carefully poised for the cams in every pic .
0 REPLY

Athiya Shetty looks dreamy under a floral shower i...