Actor Aparshakti Khurana dropped a lovely message for his brother Ayushmann Khurrana on his birthday.

Popular Bollywood actor Ayushmann Khurrana is celebrating his 38th birthday today. After making his debut in the film titled Vicky Donor in 2012, the actor has delivered a number of commercial successes at the box office including films like Dum Laga Ke Haisha, Bareilly Ki Barfi, Shubh Mangal Saavdhan, Badhaai Ho, Dream Girl, Bala, and Shubh Mangal Zyada Saavdhan to name a few. And since then, there has been no turning back for him.

Ayushmann Khurrana is one of the top actors in the Bollywood industry and has a fanbase of millions of people.

He not only prioritizes his acting profession but is also known to be very strongly connected with his family. Today, his brother and Bollywood actor Aparshakti Khurana shared a lovely message for his elder brother. He wrote, “Happy Birthday Ayush Bhaiyaaa” with a heart emoji.

Wishing his brother on his birthday, he shared a picture of Ayushmann’s at-home birthday celebrations. We can clearly see Ayushmann’s wifey Tahira Kashyap in frame standing beside him and greeting him with warmth and love. 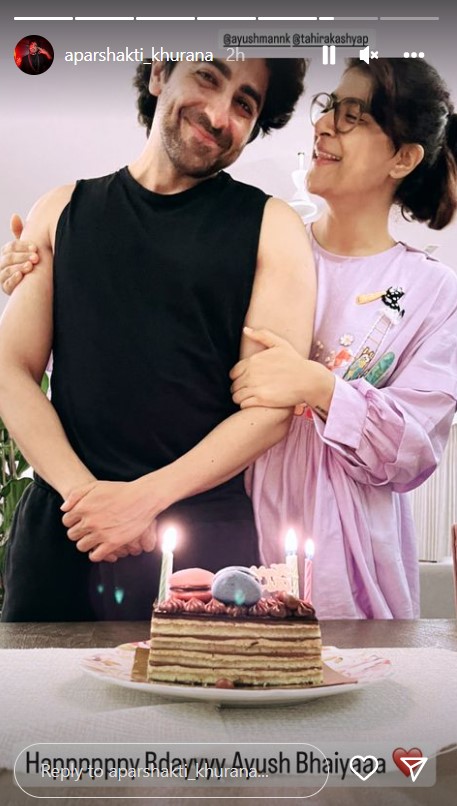 Playing a lead role in Sriram Raghavan's Andhadhun, Ayushmann alongside actors Tabu and Radhika Apte garnered appreciation for presenting a murder mystery in an epic style. He next starred in Badhaai Ho, a comedy directed by Amit Ravindernath Sharma wherein the storyline revolved around a young man whose middle-aged mother gets pregnant.

Also Read: On Ayushmann Khurrana's Birthday, take a look at 5 'thirst trap' PICS posted by him