Gujarati film Chhello Show or Last Film Show has been selected as India’s entry to the Oscars 2023, and now Roy Kapur Films has released the first trailer of the film! It was a proud moment for the country as Gujarati film Chhello Show, aka Last Film Show in English, was selected as India’s entry to the Oscars 2023 in the Best International Feature category. The announcement was made by the Film Federation of India last week. Now, Roy Kapur Films has released the first trailer of Pan Nalin’s Chhello Show, and it is receiving massive praise from all corners. Filmmaker Karan Johar has also reacted to the film’s trailer and has lauded the entire team of the film.

The trailer of Chhello Show or Last Film Show was shared with the caption, “The cinema is more than just a place…it is an experience. And #LastFilmShow is a cinematic experience like no other. Watch India's official entry to the #Oscars at a cinema near you on Oct 14th!” Karan Johar shared the trailer on his Instagram story, and wrote what a proud feat it is for the entire country. “An absolutely heart warming and proud feat for the entire country... LAST FILM SHOW (CHELLO SHOW) is putting us on the global map for being the official entry for India at the Oscars! A cinematic experience awaits to be unfurled,” wrote Karan Johar, while also adding clapping emojis. 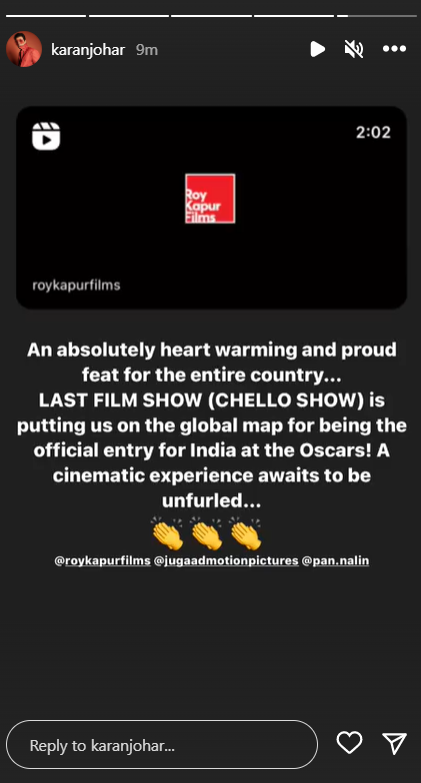 Ever since it was announced that the film has been selected as India’s official entry to the Oscars, congratulatory messages have been pouring in for the team. Last week, Ayushmann Khurrana also sent his best wishes to the team of Chhello Show, and wrote, “Wishing ‘Chhello Show’ all the very best as India’s entry for the Oscars.”

Directed by Pan Nalin, Chhello Show tells the story of a nine-year-old Samay from Chalala village in Saurashtra, and is set against the backdrop of cinemas in India witnessing a massive transition from celluloid to digital. The film stars Bhavin Rabari, Bhavesh Shrimali, Richa Meena, Dipen Raval and Paresh Mehta, and will release in theatres on October 14, 2022.