It is Deepika Padukone’s birthday today and social media is filled with wishes for the actress. She received a special gift from Project K team. Deepika Padukone is a star and there is no denying this fact. The actress has been ruling the hearts of millions of fans and also the box office for quite some time. All eyes are on her as she has a list of exciting films in her kitty. The latest one for which fans are more than excited is Pathaan with Shah Rukh Khan and John Abraham. But there is yet another exciting project that has everyone’s attention and it is the Pan-India project ‘Project K’. Well, it is Deepika’s birthday and social media is filled with wishes for the actress. But one of the most exciting wishes came from the team of Project K as they shared the first look of the actress from the movie.

Taking to their official Twitter handle, Vyjayanthi Movies shared a poster from the film Project K. This look appears to be that of Deepika Padukone. In the poster, we can see a silhouette of a woman standing against the sunlight. The face of the woman is not visible but she looks like the Gehraiyaan star. With short hair and dress like a warrior, the poster looks quite intriguing and it is written ‘A hope in the dark’. Below in the poster is written, ‘Happy birthday Deepika, Team Project K’. Sharing this poster, Vyjayanthi Movies wrote, “Here's wishing our @deepikapadukone a very Happy Birthday. #ProjectK #HBDDeepikaPadukoneb.”

Project K is a futuristic action-packed thriller directed by Nag Ashwin and is positioned as Vyjayanthi Movies ‘year special film'. The team has been shooting for Project K over the last year in multiple schedules, but little does the audience know about the world that Nag Ashwin is trying to create. Pinkvilla has exclusively learnt that Project K is going to be an action spectacle like never before with multiple Hollywood-based action directors working on the film.

“It’s set in the future and revolves around the timeline of World War 3.  The film has as many as 5 prolonged action blocks and in a one-of-its-kind strategy, the producers have hired multiple action directors to design the epic battle unfold on the screen,” revealed a source close to the development, adding further, “The action scenes in the film are of such magnitude that giving it to just one action director would not do justice to the vision. Every action block of Project K is equivalent to multiple action blocks in a feature film. And that’s the reason why four to five different action units are working on the film.”

Madhuri Dixit took to her Instagram stories to share a picture of her with Deepika Padukone and wrote, “Sending you good vibes and smiles for every second of your special day. Best wishes for Pathaan!! Have a fantastic birthday.”

Shilpa Shetty took to her Instagram stories to share a picture with Deepika and wrote, “May you have a fulfilling and successful year ahead my dearest. Stay happy stay blessed.”

Ananya Panday too shared a fun picture of Deepika kissing her while Gehraiyaan plays on TV behind them. 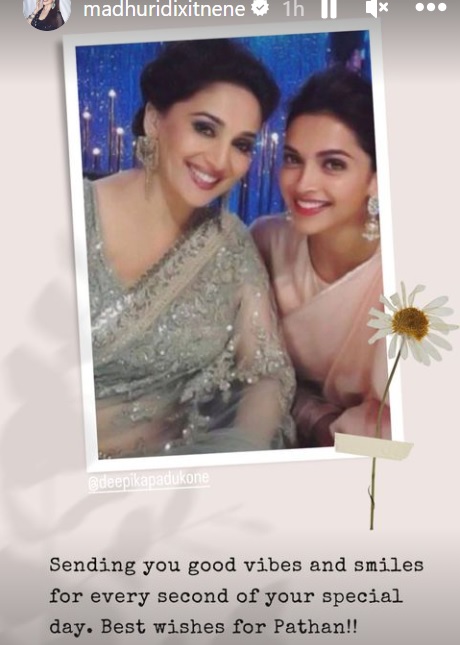 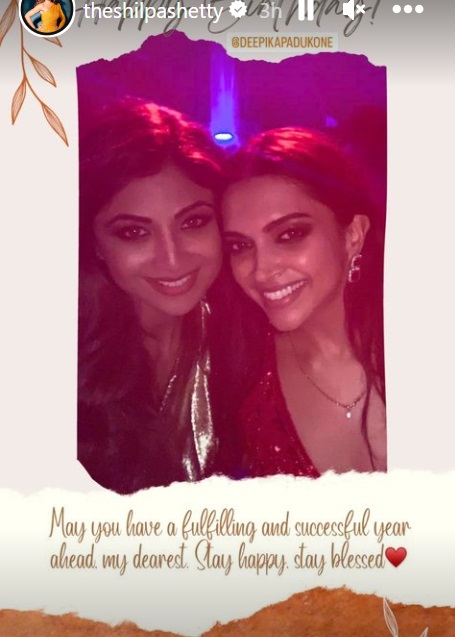 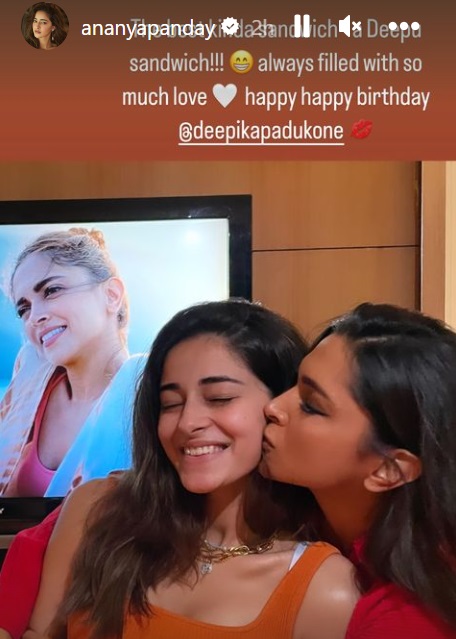 King Khan dropped Deepika's new still on Instagram and penned a sweet birthday note for her. In the picture, the birthday girl looks deadly in her spy avatar. She is seen holding a gun in her hand with wounds all over her head and hand. The intense still will definitely raise curiosity amongst the audience. Along with it, SRK wrote a note and wished Deepika on her birthday. In his note, he said that he was proud of her. He even wrote about Deepika's evolution over the years. Shah Rukh wrote, "To my dearest @deepikapadukone - how you have evolved to own the screen in every avatar possible! Always proud and always wishing for you to scale new heights… happy birthday… lots of love… #Pathaan releasing in theatres on 25th Jan in Hindi, Tamil & Telugu."

Deepika has an interesting lineup of films in the pipeline. She will be seen in Pathaan with Shah Rukh Khan and John Abraham. The film is releasing on 25th January 2023. She also has Fighter with Hrithik Roshan, Project K with Prabhas, The Intern remake with Amitabh Bachchan, and Singham 3 with Ajay Devgn.

Anonymous
Jan 08, 2023
They all say nice things about each other before any new films release . How cliched .
0 REPLY