Did Ranbir Kapoor's niece Samara assist him on the sets of Brahmastra?

We found a cool picture of Ranbir and Samara from Brahmastra sets. Take a look. Ranbir Kapoor and Alia Bhatt starrer Brahmastra has been doing tremendously well at the box office. After a long delay, the Ayan Mukerji directorial was finally released on September 9 and it has been enjoying rave reviews from the audience and critics alike. Post its release, Ayan and Alia have been sharing unseen and BTS moments from the sets. On Sunday, Ranbir's sister Riddhima too dropped an unseen picture of her daughter Samara and him from Brahmastra sets.

'Learning from the Best'

Riddhima is often seen sharing unseen pictures of her family members on social media. This time, she shared a cool picture of Ranbir chilling with his niece Samara during the filming of Brahmastra. In the picture, Samara is seen intensely looking into the camera while the daddy-to-be Ranbir is busy assisting her. He has opted for a sky-blue kurta paired with white pajamas. On the other hand, Samara is seen sporting casual attire. Along with the picture, Riddhima wrote, "Learning from the best! When Sam visited her uncle on the sets of Brahmastra #throwback." Going by the picture and Riddhima's caption, it seems like Samara has a keen interest in filmmaking. Future filmmaker in the making! Have a look: 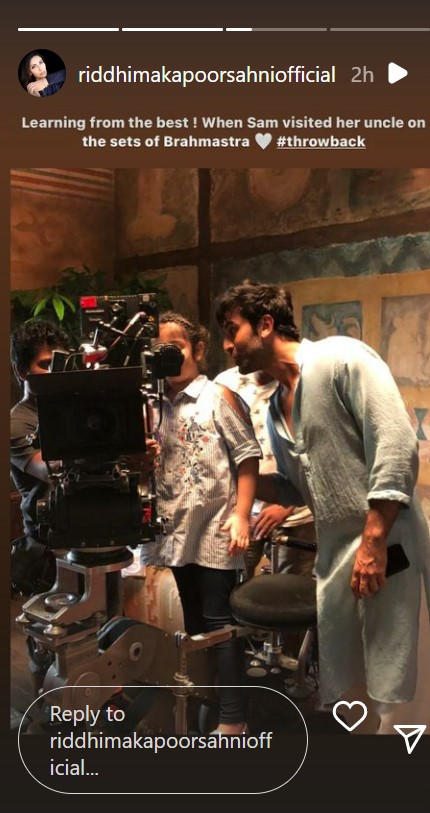 Recently, Riddhima and Samara were seen attending Alia's baby shower ceremony along with Neetu Kapoor. The mom-to-be shared glimpses of her ceremony with her fans and they were all things beautiful. The intimate ceremony was also graced by Soni Razdan, Mahesh Bhatt, Shaheen Bhatt, Pooja Bhatt, Karisma Kapoor, Shweta Bachchan Nanda and Alia's close friends. Riddhima also shared gorgeous selfies with the parents-to-be.

Speaking of Brahmastra, Ayan Mukerji recently confirmed that he has started working on the second part already. He also confirmed that it will hit the screens in the next 2-3 years.