Kiara Advani and Sidharth Malhotra have been dating each other for quite some time now. While lovebirds refuse to comment on it in public, Shahid Kapoor has something to say on this in a quirky way. Kiara Advani and Sidharth Malhotra have been dating each other for quite some time now. See how Shahid Kapoor reacted.

Shahid Kapoor and Kiara Advani are undoubtedly each other’s best friends in B-Town. The latest season of Koffee With Karan proved the same. The camaraderie shared by the lead actors of Kabir Singh on the couch of the chat show is loved by many to date. While speaking candidly on the show back then, Shahid hinted about Kiara and Sidharth Malhotra’s upcoming wedding. This news had taken the internet by storm.

In the latest update, Shahid Kapoor has again hinted at Kiara Advani’s relationship status. While congratulating Kiara’s brother Mishaal Advani for his new venture, the Mausam actor wrote, “Congratulations @mishaaladvani…and to you too @kiaraaliaadvani” with a wink emoji.

Well, was Shahid hinting at Sidharth Malhotra and Kiara Advani’s upcoming marriage? Only time will tell. 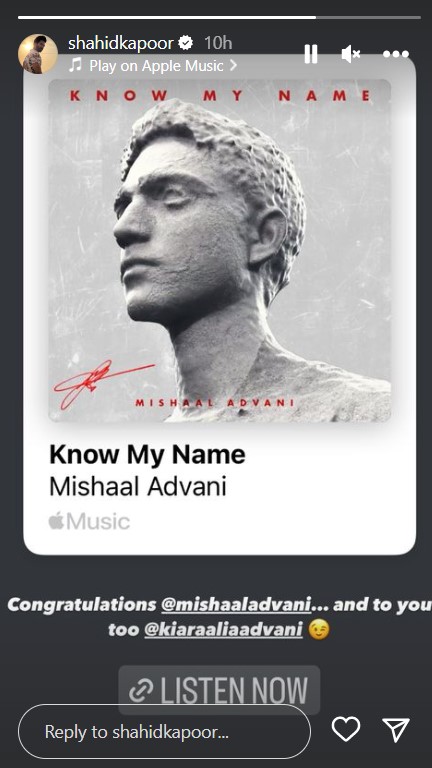 Salman Khan congratulates Sidharth Malhotra ahead of “his marriage”

On October 16, the promos of the popular reality show Bigg Boss showed that host Salman Khan spilled beans about Sidharth's rumoured relationship and wedding with Bollywood actress Kiara Advani. In the clip that had surfaced online, Salman can be seen congratulating Sidharth on his marriage. This further added fuel to the rumours.

Now, only time will tell what the future holds for the lovebirds!

Also Read: Kiara Advani’s floral midi dress is all things fun and flirty; Its COST will leave you surprised

Anonymous
Nov 12, 2022
And once agsin we non Hindi speaking fans are left in the dark about what was being said! Please remember all your fans!!!!!!
0 REPLY