Ahead of the release of his debut film Qala, Babil Khan's mom Sutapa Sikdar took to social media and dropped a precious throwback memory of him and Irrfan. Irrfan Khan, who passed away in 2020, was one of the most loved actors in Bollywood. His demise shocked the entire nation. Two years after his demise, his son Babil Khan is all set to start his journey as an actor. His debut film Qala is all set to release on December 1 on an OTT platform. Ahead of the release, his mom Sutapa Sikdar took to social media and dropped a precious throwback memory of him and Irrfan.

Sutapa, who is often seen sharing priceless memories of the late actor, took to her Instagram story and posted a childhood picture of Babil. The picture also featured Irrfan. Going by her caption, the picture was clicked during little Babil's first visit to Irrfan's film set. In the picture, Irrfan is seen holding Babil in his arms while he is busy looking at something. Along with the picture, an emotional Sutapa wrote, "First day to babas set to release of your film #qala #elderson #pressureofparenting #gratitude." 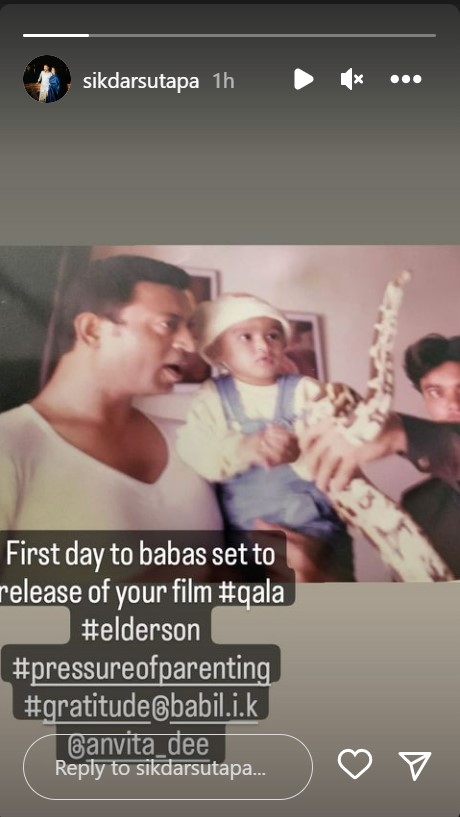 Recently, in an exclusive interview with Pinkvilla, Babil spoke about going through difficult times after his dad's demise. He said, "It was difficult to accept myself and to be like yes to accept your flaws. And to understand that who you were when baba was there. The protection that baba gave me which was gone suddenly. I got really scared, very scared and so that’s why it was extremely difficult."

ALSO READ: Babil Khan says it's against his 'values' to use father Irrfan Khan's name for his career; Here's why