We have a list of celebs who decided to quit the micro-blogging site in the past. People say social media is bane and a boon and it’s true when it comes to Bollywood celebs. A handful of celebs benefit from social media platforms while there are a few who succumb to massive trolling and negative comments. Bollywood celebs use platforms like Instagram and Twitter to interact with their fans on a daily basis. But every now and then, netizens are seen writing abusive and toxic comments under their posts. On Monday, renowned filmmaker Karan Johar quit Twitter. Earlier, celebs like Aamir Khan, Sonakshi Sinha and others too had deactivated their Twitter accounts. So, we have compiled a list of celebs who decided to quit the micro-blogging site in the past:

On October 10, Karan Johar posted his last tweet and announced that he is quitting Twitter. He has been facing a lot of trolling online. His chat show, Koffee with Karan 7 grabbed a lot of attention like always but this time, people were seen targeting him for constantly mentioning mommy-to-be Alia Bhatt's name throughout the season. During the finale episode, Karan went on to reveal that even Alia pointed out the same thing and asked him to not mention her. In his last tweet, Karan said that he is leaving Twitter to ‘make space for more positive energies’. His tweet read, "Making space for more positive energies only and this is step one towards that. Goodbye Twitter!" 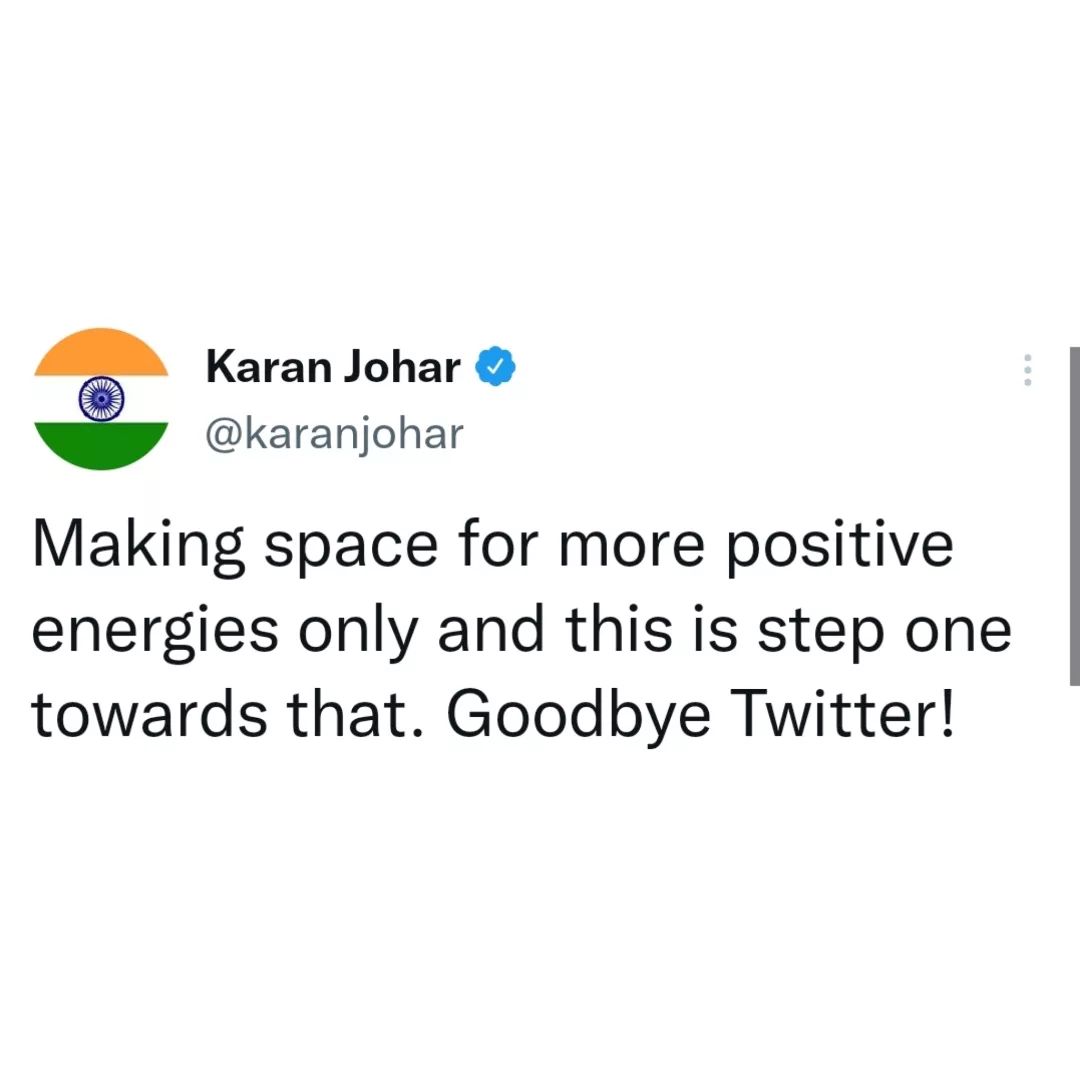 In 2020, Sonakshi announced her decision to leave Twitter to 'stay away from negativity'. She quit the platform after Sushant Singh Rajput's sudden demise. The actress took to Instagram and shared the update with her fans. Her post read, "The first step to protecting your sanity is to stay away from negativity. And nowhere more of that than Twitter these days. Chalo I'm off-- deactivating my account. Bye guys, peace out. Aag lage basti mein... mein apni masti mein! Bye Twitter."

In 2021, after celebrating his birthday, Aamir shared a note with his fans to update them about his decision to leave social media. He revealed that he wanted to focus on work and keep himself dedicated to his art. Before exiting, Aamir wrote, "Hey guys, thank you so much for all the love and warmth on my birthday. My heart is full. In other news, this is going to be my last post on social media. Considering that I am SO active anyway. I have decided to drop the pretence. We will continue to communicate as we did before. In addition, AKP has created its official channel! So future updates on me and my films can be found there. Here’s the official handle! @akppl_official. Lots of love, always. a."

Saqib also decided to leave Twitter and cited ‘bullying and lack of kindness’ as the main reasons. He shared a long note with his fans and thanked them for their love. A part of his note read, "Hey Twitter, when we met for the first time, you were a lovely. A great platform to express feelings, gather knowledge and understand many different points of view. But, of late you seem to have gotten lost in all the hate everyone is so ready to throw at each other, a place of bullies, a place where abusing people is a normal code of conduct. These last few days have forced me to realise that I don't need this kind of energy in my life, where I wake up to hatred, where kindness is lost. It has made me realise that I need to surround myself with people, things, content and vibes that reflect who I want to be and how I want to feel; energies are contagious!"

Dhadak director Shashank Khaitan also quit the platform after Sushant's demise in 2020. Amid the nepotism debate, he called Twitter a ‘breeding ground for hate and negativity’. His post read, "Done with twitter… just a breeding ground for hate and negativity… very sad that a platform so powerful, could not be used to create a better world… praying for peace and love always… deactivating my account now..."

Zaheer Iqbal made his Bollywood debut alongside Pranutan Bahl in Notebook and Salman Khan backed the film. He also bid goodbye to Twitter without revealing any particular reason. The actor is rumoured to be dating Sonakshi.

Salman's brother-in-law Aayush Sharma also decided to leave Twitter due to negativity. He took to Instagram and wrote, "280 characters are less to define a human being. But 280 characters are more than enough to spread fake news, hatred and negativity. Didn’t sign up for this nasty herd mentality. Khuda hafiz."