Vicky Kaushal’s upcoming film Govinda Naam Mera will release on OTT platform, and the actor has announced the same by posting a fun video with Karan Johar. Check it out! Vicky Kaushal is one of Bollywood’s most popular actors, and has proved his acting mettle time and again with his versatile roles in films such as Masaan, Raazi, URI, and many others. The actor will next be seen in Govinda Naam Mera with Bhumi Pednekar and Kiara Advani. Fans had been eagerly waiting for any update about the movie, and the actor has now revealed that the film will release on an OTT platform. Vicky shared a fun video with Karan Johar, the producer of the film, to announce the same. The video has left fans in splits!

The fun video shared by Vicky and Karan on Instagram shows both of them discussing Vicky’s role in films. Karan Johar tells Vicky that he is such an entertainer, but only plays intense roles in movies. “Kabhi freedom fighter, to kabhi commando. Dukh tera khatam hi nahi hota hai,” said KJo. He then adds that Vicky is now a star, and that he wants to see him do something more ‘masaledaar’. “I want to see fun Vicky,” adds Karan. He then pitches a new story to Vicky, but it isn’t what the actor was expecting.

When Vicky seems doubtful of the role, Karan Johar offers him another film. He tells Vicky he can either do KJo’s Govinda Naam Mera or Student Of The Year 3. The fun video ends with Vicky hilariously agreeing to Govinda Naam Mera. Announcing the OTT premiere of the film, Vicky wrote, “Picked the #FunVicky option. See you soon! Sambhaal lena. #GovindaNaamMera coming soon only on @disneyplushotstar!” Check out the video below.

Katrina Kaif shared the video on her Instagram story, and wrote that she loves 'fun Vicky'. Her caption read, "Love the fun Vicky @karanjohar you are hysterical." Have a look: 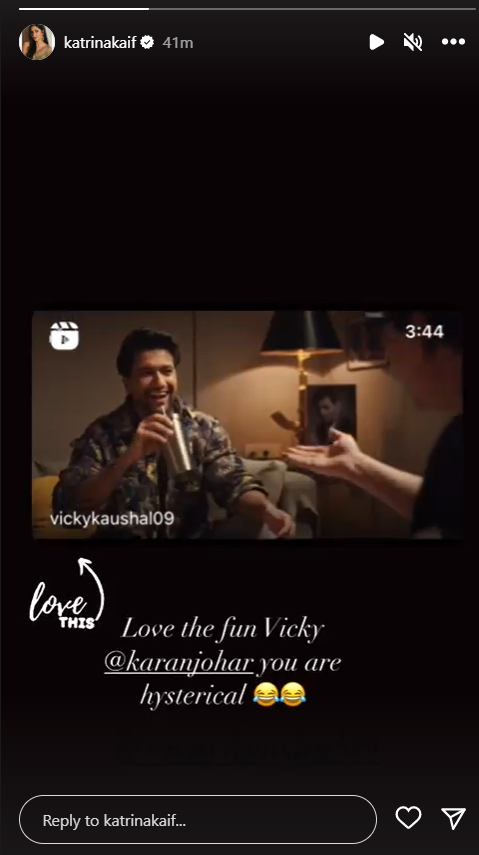 Govinda Naam Mera stars Vicky Kaushal, Bhumi Pednekar and Kiara Advani. It has been written and directed by Shashank Khaitan, and is co-produced by Karan Johar, Hiroo Yash Johar, and Apoorva Mehta.

Apart from Govinda Naam Mera, Vicky Kaushal will also be seen in Meghna Gulzar’s Sam Bahadur, a biopic film based on the life of Sam Manekshaw.  He also has Laxman Utekar's untitled next film with Sara Ali Khan lined up.