Guess who sent gifts to Malaika Arora for celebrating festive season? It is not Arjun Kapoor

Anshula Kapoor has sent some exciting gifts for the actress Malaika Arora. Do check it out here.

Guess who sent gifts to Malaika Arora for celebrating festive season? It is not Arjun Kapoor Anshula Kapoor has sent some exciting gifts for the actress Malaika Arora. Do check it out here.

Arjun Kapoor and Malaika Arora have been dating each other for quite some time now and it is no secret. They are never shy to make public appearances together and their social media handles are proof of the same. In the month of September, they were spotted together on numerous occasions, be it at fashion designers Arpita Mehta and Kunal Rawal’s wedding or in cities of Europe.

India is entering the festive season. The month of October is filled with several popular festivals like Dusshera, and Diwali to name a few. To make this festive season more special for Malaika, Arjun’s sister Anshula Kapoor has sent special gifts for Malaika.

Malaika thanked Anshula for the gift hamper and wrote, “Perfect way to usher in the festive season. Thanks @anushulakapoor” 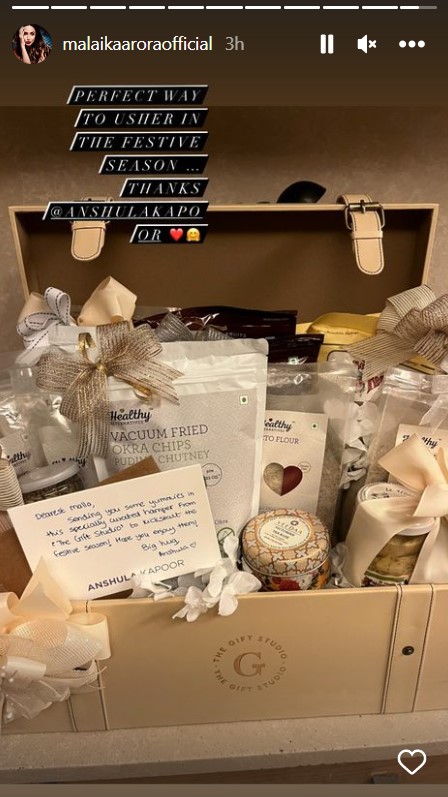 For the unversed, Malaika Arora is known for her performances in popular songs like Chaiyya Chaiyya (1998), Maahi Ve (2002), Kaal Dhamaal (2005), and Munni Badnaam Hui (2010) to name a few. She has also judged popular television shows like Nach Baliye, Jhalak Dikhhla Jaa, and India's Got Talent.