Virat Kohli celebrates his birthday on November 5, and on that occasion, we bring to you his most adorable pictures with Anushka Sharma that prove they are vacation lovers. Virat Kohli and Anushka Sharma have been always redefining what it means to be a power couple. Doting parents to their adorable daughter Vamika, the lovebirds always make headlines for their adorable photos that have been taken over the internet. Both Virat and Anushka are often hailed as the epitome of couple goals. In 2013, the two met for the first time on the sets of a television commercial shoot, after which they fell in love. The actress-cricketer couple has always been together through thick and thin, facing every hardship and coming out stronger.

Anushka and Virat tied the knot on December 11, 2017, in an intimate ceremony, at a dreamy location near Tuscany, Italy, after dating each other for a couple of years. The wedding festivities were attended by Virat and Anushka's family and close friends only. When the two shared pictures from their secret wedding, it made our hearts explode with how perfect everything was. The couple later hosted grand wedding receptions in Mumbai and Delhi, which saw the convergence of several Bollywood and cricket stars. In the same year, before their wedding, Virat also publicly spoke about how Anushka made him a better person in life and how he’s so grateful for her.

They are quite active on their social media handles posting adorable pictures of themselves together. Their adorable photographs and captions have created a huge following for Virushka, as they are popularly known. In spite of their hectic work schedule, Virat and Anushka always make sure to spend time with each other and they are also often spotted taking vacations and travelling to beautiful places to enjoy their time together. Today, as Virat Kohli celebrates his birthday, we decided to take a look at such moments and the couple's vacation photos which have gone viral in the last few years making fans fall in love all over again. Check it out:

After tying the knot in Italy, Virat Kohli and Anushka Sharma quickly headed off for their European honeymoon. The couple went to the gorgeous Nordic country, Finland, where they were spending their nights watching the Northern Lights, which makes it just the perfect honeymoon experience. The happy couple wanted a break from the paparazzi and yearned to spend some quiet time exploring the picturesque country. Anushka shared a selfie with her hubby Virat and a snow-covered landscape in the background and their honeymoon as “In heaven, literally." Both are decked in ski gear and black beanies against the beautiful backdrop. In it, the Rab Ne Bana Di Jodi actress can be seen flaunting her henna-clad hands and her wedding ring 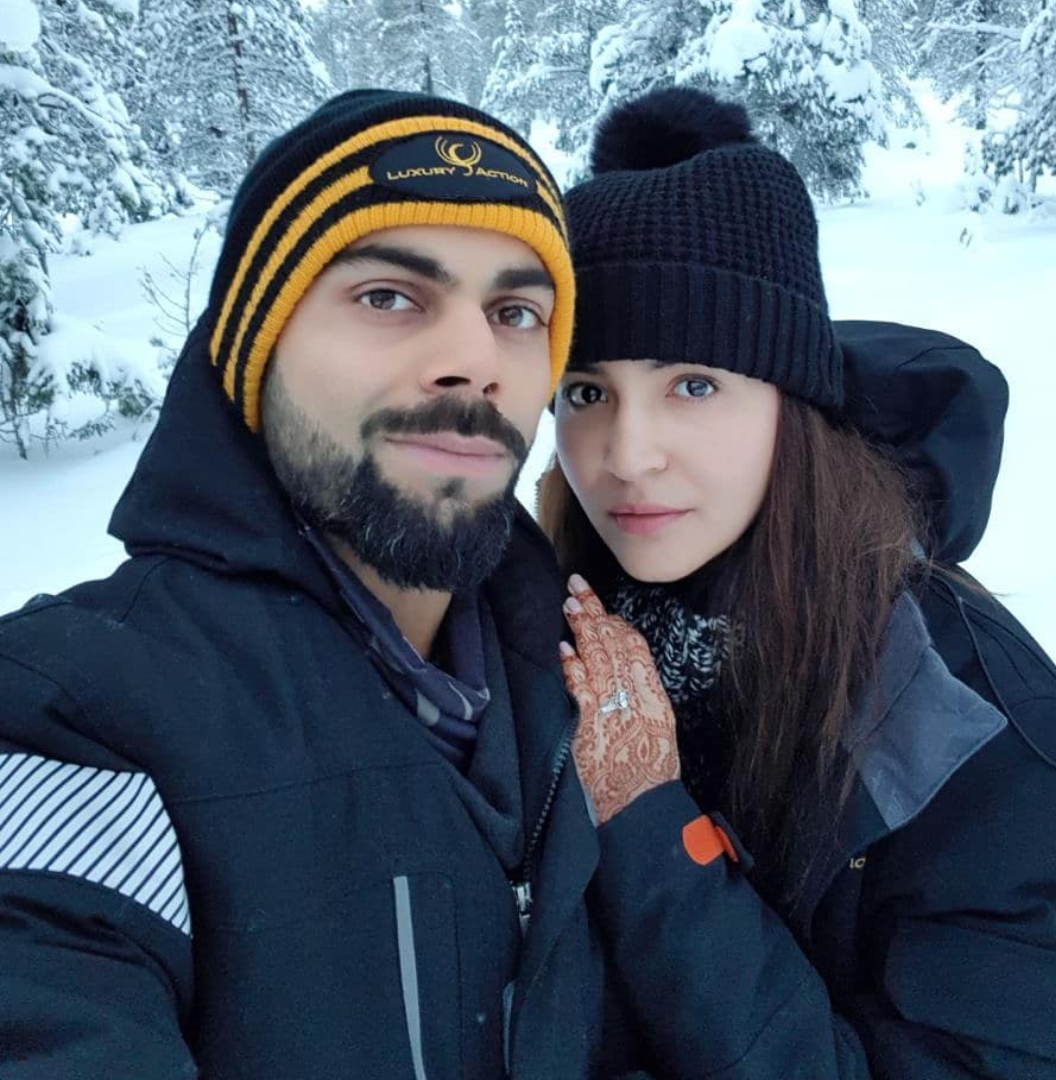 2. Enjoying by the beach

Anushka was seen having a gala time in the Caribbean islands as she accompanied her husband Virat Kohli on his cricket tour. Both of them are smiling at the camera with a bright blue sky above them and the ocean in front of them. Sharing a picture on social media, Kohli captioned it with just a bunch of emojis--a couple, the sun and a heart. Anushka also shared a picture of herself in an orange and white bikini, posing by the ocean, with the caption: “Sun kissed & blessed.” While in another photo, Virat is seen resting his head on Anushka's lap while she cutely holds him. 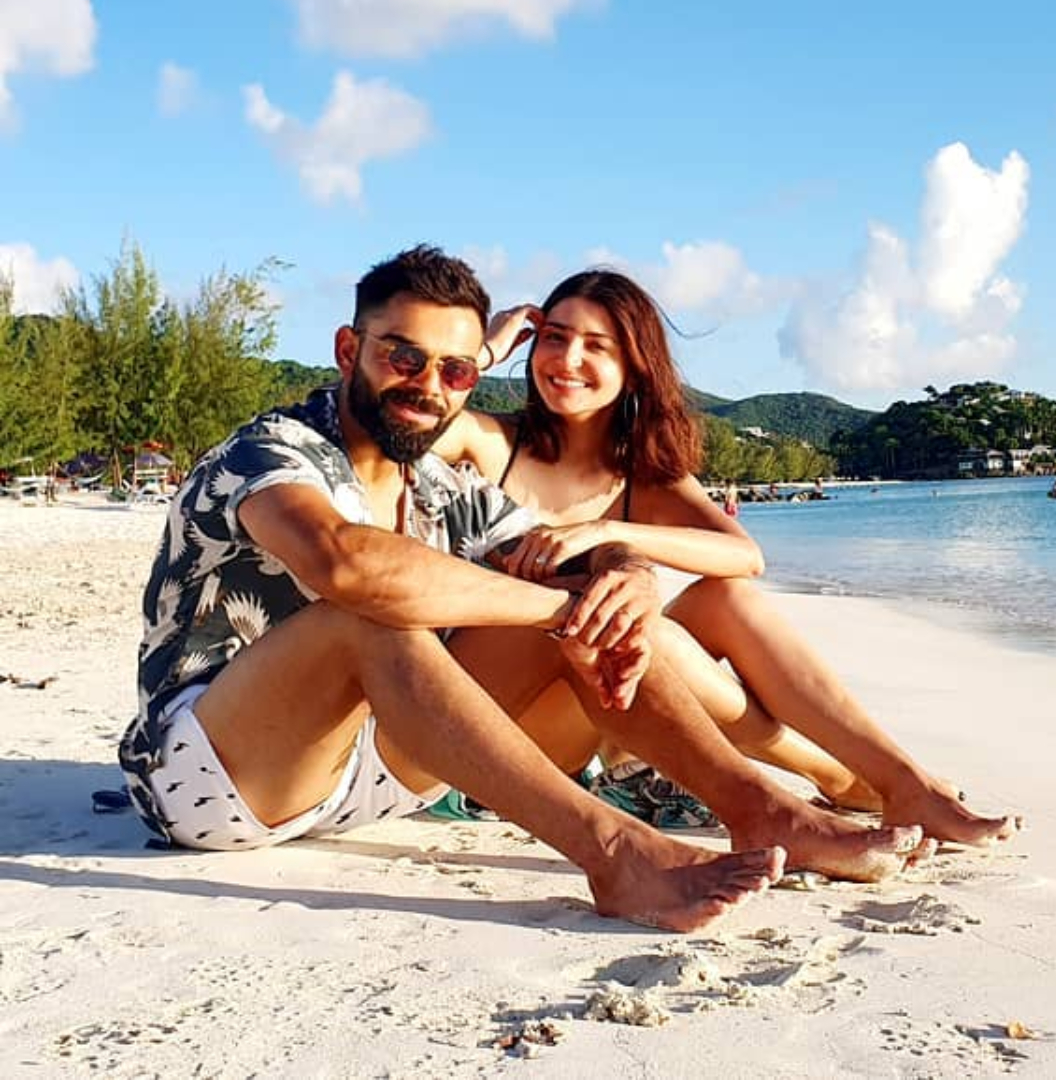 Anushka Sharma and her cricketer husband Virat Kohli jetted off to Switzerland to celebrate Christmas and welcome the New Year in 2019. In the pictures, the star couple can be seen posing together with the snowy mountains behind them. Anushka is in an orange tracksuit, snow boots and dark glasses, while Virat is in a dark green tracksuit. They appear to be at a ski resort. Virat and Anushka also bumped into Varun Dhawan and his wife Natasha Dalal. "Hello frands @varundvn @natashadalal88," Anushka Sharma captioned the image. Varun Dhawan reshared the picture and called Virat and Anushka his "mountain ke dost." 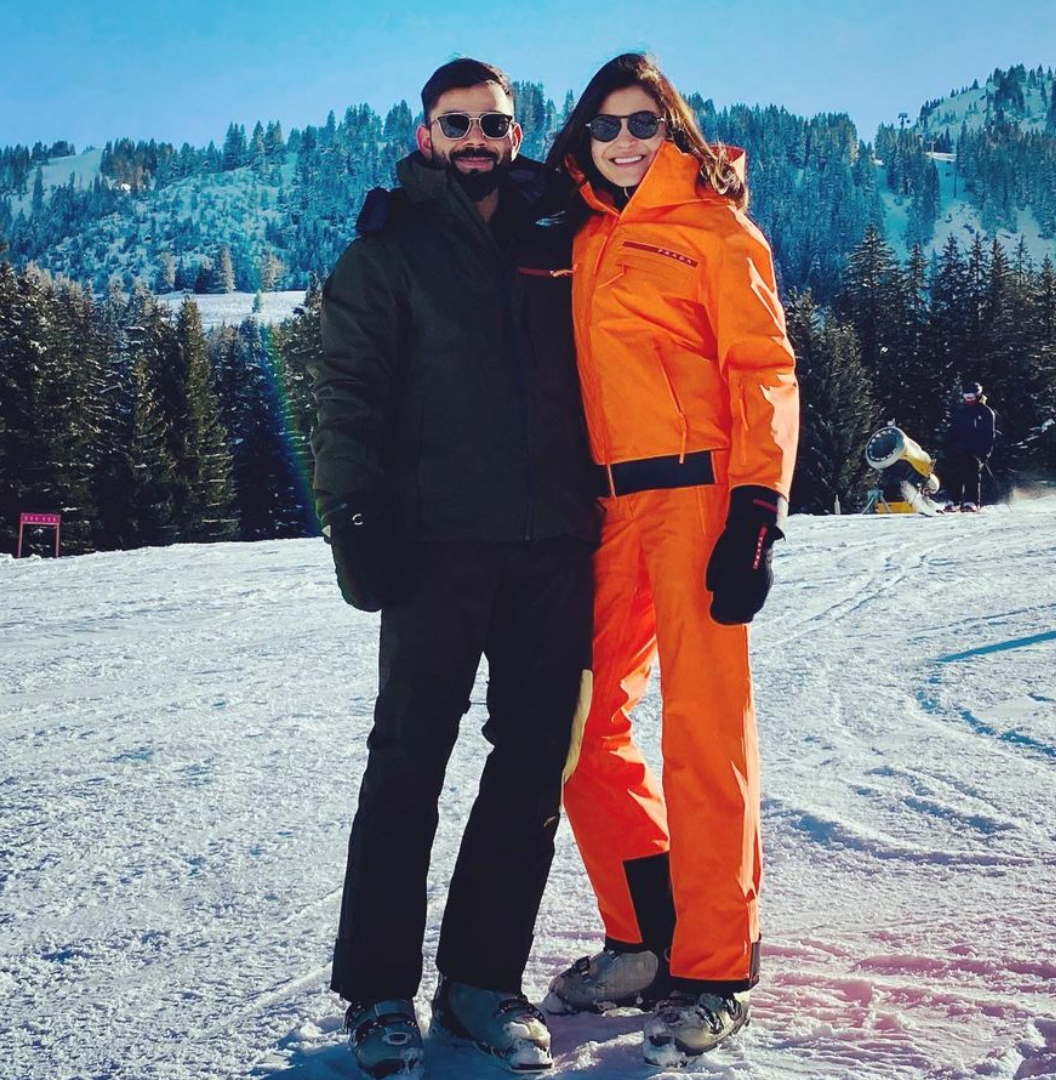 In 2019, Virat Kohli had the best time with his wife Anushka Sharma, in Bhutan. The couple also went out trekking in the mountains, when a Bhutanese family took them into their home and offered tea to random but tired ‘trekkers’. The duo also shared pictures of the Bhutanese landscape from their social media accounts.

Sharma also penned a long caption, that read: "Today, during our 8.5 km uphill trek we stopped by a small village on a mountain to pet and feed a baby calf who was born just 4 months ago. While we did that the owner of the house asked us if we were tired and wanted to have a cup of tea. So we went in to the home of this beautiful and warm family who had absolutely no idea who we were and yet they treated us with such warmth and love. We spent some time with them chatting and drinking tea and the whole time they just know us as two tired trekkers ! Whoever knows virat and me very closely, know that both of us live for such moments of genuine , simple & pure human connection . It fills us with such joy and peace knowing that they just wanted to be kind to two random foreigners ( plus our guide ) without seeking anything in return. If this is not the true meaning of life then i dont know what is . A memory we will cherish forever" 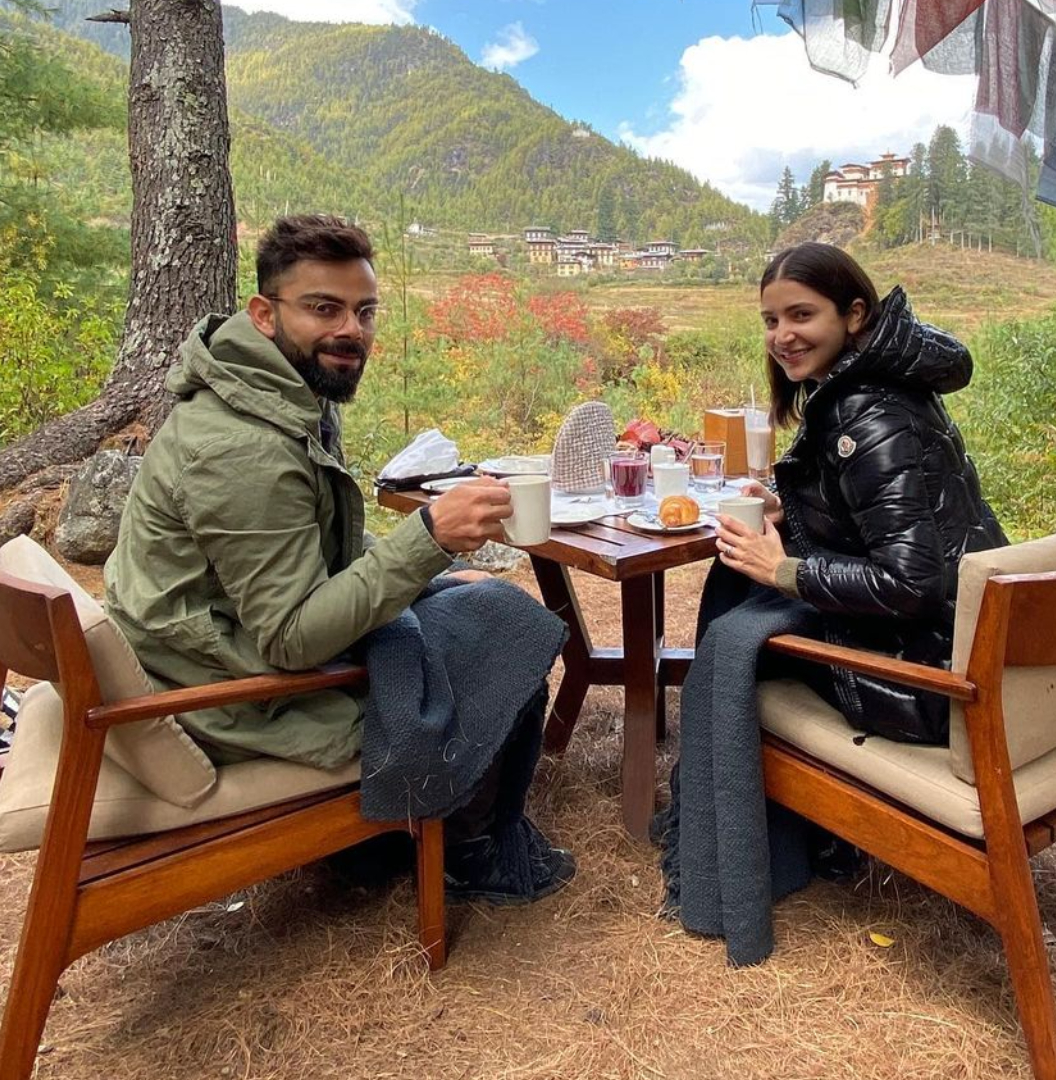 Anushka and Virat spent a few weeks in Australia, where the cricketer and the Indian cricket team were playing ODI (One Day International) matches. They also shared some pictures of themselves as they spend time close to nature during their vacation. Ardent animal loves, Virat and Anushka were also seen posing with horses while spending some quality time at a ranch. The actress captioned it: "Days like these." Virat, on the other hand, also shared a photo with his ladylove Anushka, where she is seen hugging him cutely. 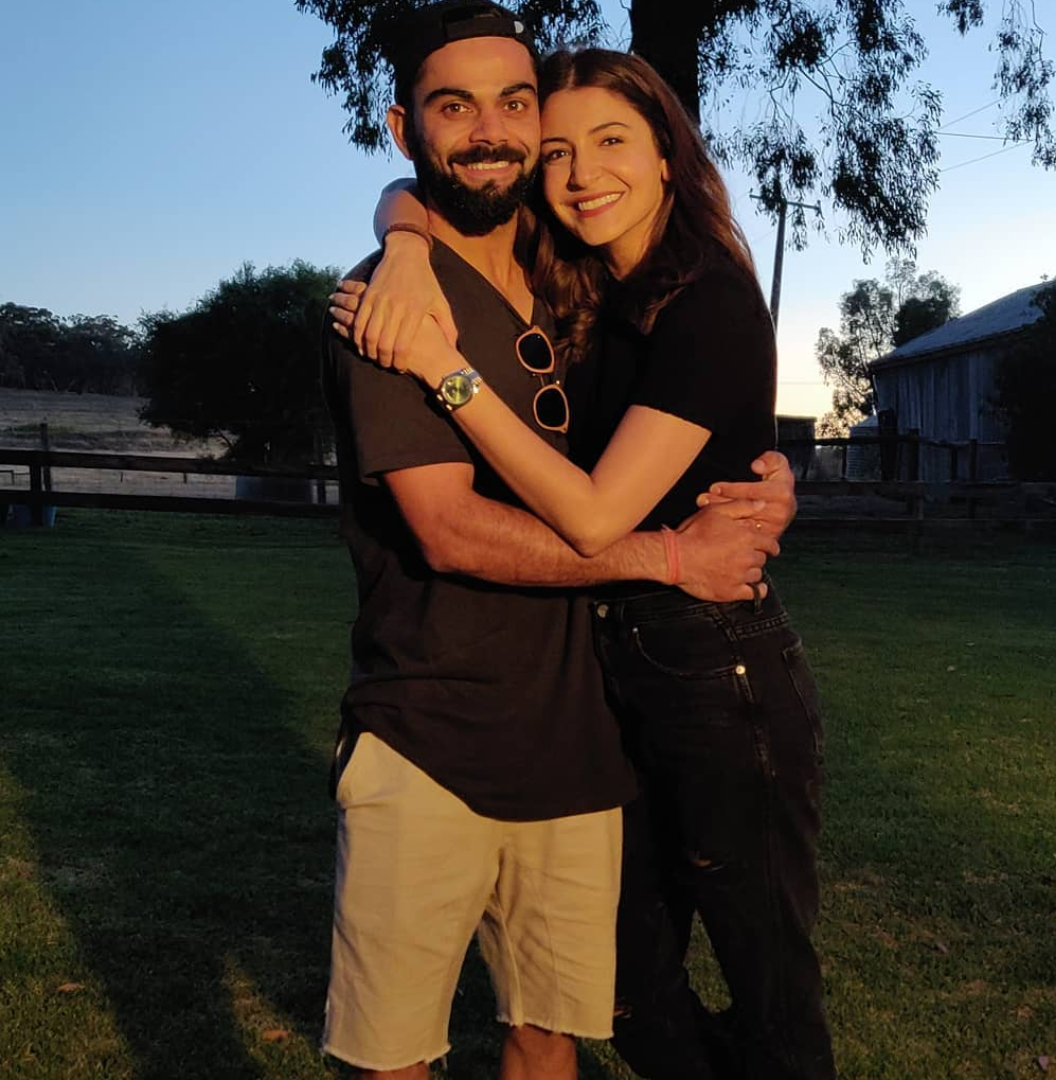 8 Times Anushka Sharma and Virat Kohli gave us the...