Vicky Kaushal and Katrina Kaif never fail to exude couple goals and Instagram is proof of the same. Do have a look at the sweet messages they exchanged with each other. Vicky Kaushal and Katrina Kaif never fail to exude couple goals and Instagram is proof of the same.

Katrina Kaif and Vicky Kaushal are amongst the most popular celebrity couples in Bollywood. They both have set benchmarks in Bollywood with their streamlined acting skills over decades. Though fans are eagerly waiting to see their on-screen chemistry in a Bollywood film, the love they share for each other is no secret. On Sunday, the trailer of Vicky Kaushal starrer Govinda Naam Mera was released and this is how the lovebirds spoke with each other.

The makers of Govinda Naam Mera unveiled the trailer of the film which is all set to release on Disney Plus Hotstar in December this year. This comedy thriller features Vicky Kaushal, Bhumi Pednekar, and Kiara Advani in lead roles.

Appreciating the team of this upcoming film, the Tiger Zinda Hai actress said, “Looks too fun” and attached a star-eyed emoji. Reacting to this, Vicky dropped a red heart emoji and wrote, "My Love". 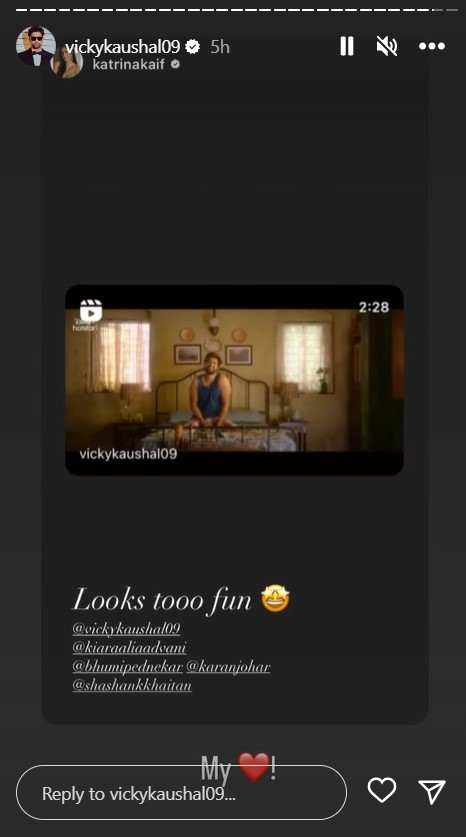 Soon after Govinda Naam Mera Trailer’s screening event got over in Mumbai, paps went ahead and asked the actor about Katrina’s reaction after watching the trailer of the film. Vicky smilingly with a little blush said, “Accha laga.”

Paps then immediately asked that they both should share screen space together sometime soon in the future, to which Vicky said, “Aap log produce karo” and gave a cute smile.

For the unaware, Katrina Kaif and Vicky Kaushal got married on December 9, 2021. Their wedding took place at the Royal Hotel Six Senses Fort Barwara, Sawai Madhopur in Rajasthan.

How Vicky Kaushal nailed the hook step of Katrina ...