Hollywood actor Jennifer Aniston's father John Aniston passed away at 89. Jennifer just posted this update a few moments ago and penned down a heartfelt note on it. It is indeed a difficult time for actor Jennifer Aniston as her father John Aniston passed away on November 11. Veteran actor John Aniston died at the age of 89. For those who are unaware, John Aniston was best known for his role as Victor Kiriakis on the TV show Days of Our Lives.

Jennifer announced the death of her father on her official Instagram handle just a few moments ago. In a post shared by her, we can see a couple of throwback pictures featuring her father John.

"Sweet papa... John Anthony Aniston. You were one of the most beautiful humans I ever knew. I am so grateful that you went soaring into the heavens in peace - and without pain. And on 11/11 no less! You always had perfect timing. That number will forever hold an even greater meaning for me now I'll love you till the end of time. Don't forget to visit," Jennifer Aniston wrote in her Instagram post.

Soon after Jennifer dropped this Instagram post, Hollywood celebrities like Reese Witherspoon, Jennifer Lopez, Justin Theroux, and others dropped their heartfelt messages in the comments sections. 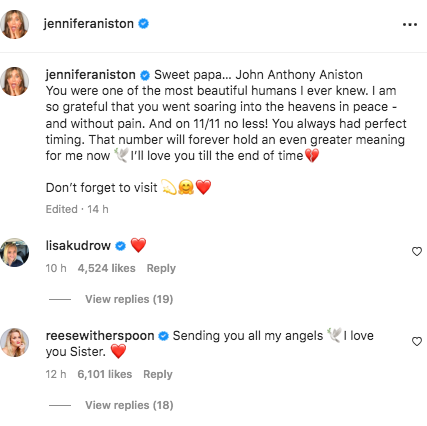 Also Read: Jennifer Aniston reveals IVF journey, SLAMS claims she, Brad Pitt broke up "Because I wouldn't give him a kid"

Matthew Perry reveals he was 'crushing badly' on T...