Taimur Ali Khan is one of the most followed and famous star kids in the industry. Kareena Kapoor Khan is one of the most stylish actresses in Bollywood. She recently returned to Mumbai after wrapping up her upcoming untitled project helmed by Hansal Mehta. The actress was accompanied by her son younger son Jeh. However, today she shared an unseen picture of her elder son Taimur Ali Khan as she wished her best friend Natasha Poonawalla on her birthday. To note, he is one of the most popular star kids. Shutterbugs love to click him.

Unseen Pic:
Taking to her Instagram stories, the actress shared a black and white picture that shows her holding little Taimur as she poses with Natasha. She also wrote, “Sending you a big big hug .. Missing you.” In the picture, Taimur looks cute and is busy playing. Well, the actress often shares pictures of her sons on social media. Last night the Laal Singh Chaddha actress shared a glimpse of her Friday night entertainment. "Friday nights are for Harry Potter and ... (hearts filled smiling face)," wrote Kareena Kapoor Khan. 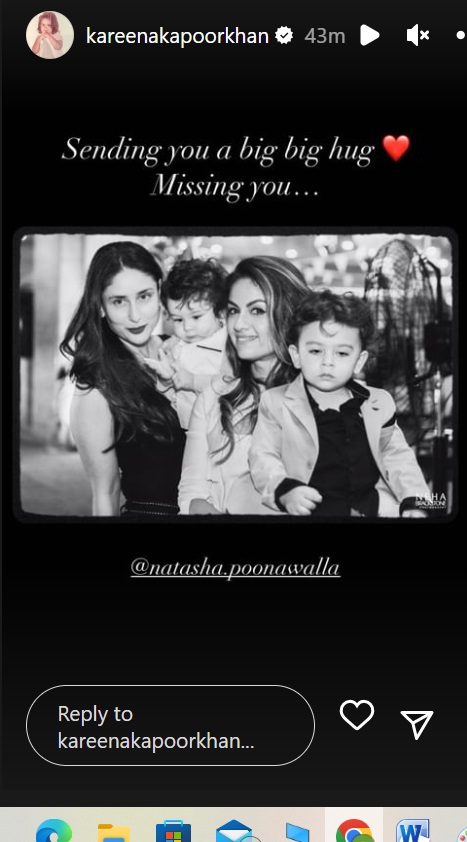 Upcoming work
She was last seen in Aamir Khan starrer Laal Singh Chaddha. Kareena Kapoor Khan played the role of Rupa in the film and earned rave reviews for her performance. The actress is now set to make her digital debut with the upcoming Netflix project, which is an official remake of The Devotion Of Suspect X. The movie, which is helmed by Sujoy Ghosh, stars Kareena Kapoor Khan, Vijay Varma, and Jaideep Ahlawat in the lead roles.

Kareena Kapoor on Saif Ali Khan having a child eve...