Vikram Vedha, directed by Pushkar and Gayatri and starring Hrithik Roshan, Saif Ali Khan, Rohit Saraf and Radhika Apte is among the most awaited Bollywood films and the film finally sees a release on 30th September, 2022, coinciding with the Gandhi Jayanti holiday weekend. The film is a remake of the Vijay Sethupathi and R Madhavan's Tamil languaged action thriller, with the same title. The buzz of the film is slowly building up as the release approaches. A celebrity screening of the film was held on 26th September and was attended by many noted dignitaries like Kareena Kapoor Khan.

Kareena Kapoor Khan shared her review of Vikram Vedha on Instagram stories. She absolutely loved the film. Her review read, "Best film, best actors, best directors. What a film. Blockbuster". She tagged the cast and crew of the film in her story too. A few other individuals from the press and media attended the private screening. Vikram Vedha's teaser and trailer have been well received. The two songs Alcoholia and Bande have been getting positive feedback too. The makers have systematically released all the assets of their film and the promotional activities are being carried out too.

Have a look at Kareena Kapoor Khan's review of Vikram Vedha: 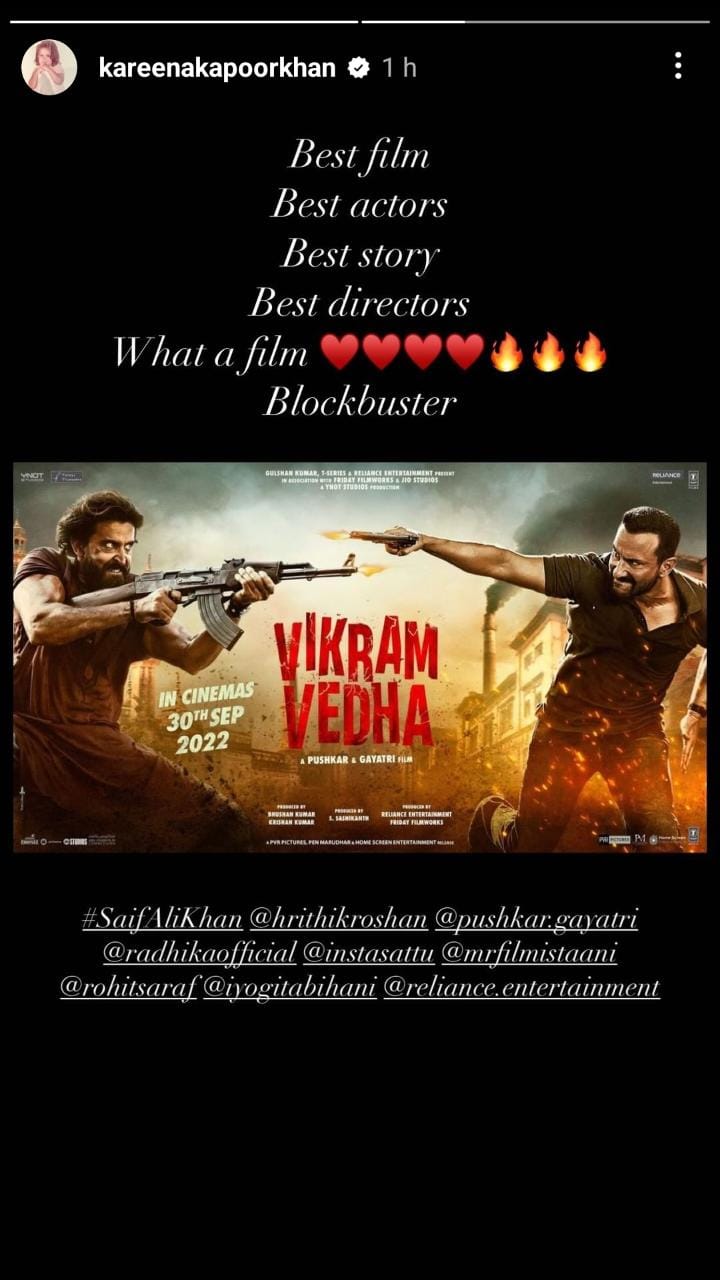 Meanwhile, on the work front, Kareena will be seen next in Sujoy Ghosh's thriller, which will be based on the Japanese book The Devotion of Suspect X. This marks her debut on the OTT platform. Apart from this, she will make her debut as a producer with Hansal Mehta's thriller project. Kareena will also collaborate with Rhea Kapoor again. Saif Ali Khan, after Vikram Vedha, will be seen in Om Raut's Adipurush, co-starring Prabhas and Kriti Sanon. The film is scheduled to release on 12th January, 2023, on the occasion of Sankranti 2023. Hrithik Roshan has already started working on his physique for the aerial action film Fighter, directed by Siddharth Anand and co-starring Deepika Padukone and Anil Kapoor. The film will see an October 2023 release.

Anonymous
Sep 27, 2022 01:23 AM
Too soon to celebrate..of course, it\'s a blockbuster in Tamil. Your praises are for your hubby.
0 REPLY
View more comments

When the who's who of Bollywood came together for ...

From ADHM-Shivaay controversy to Shahid welcoming ...

Kareena and Saif get the royal slip from Hrithik's...

Bebo all set to bounce back?