Kartik Aaryan resumes shooting on the sets of Satya Prem Ki Katha; Says ‘back To work’

Kartik Aaryan has resumed working on the sets of Satya Prem Ki Katha and we are wondering how will Kiara Advani react to this post. Check it out below.

Kartik Aaryan resumes shooting on the sets of Satya Prem Ki Katha; Says ‘back To work’ Kartik Aaryan has resumed working on the sets of Satya Prem Ki Katha.

Kiara Advani and Kartik Aaryan are surely among the most popular actors in the film industry. Recently, fans were head over heels in love with their on-screen chemistry in Bhool Bhulaiyaa 2, which was released in May this year and went on to become one of the super-duper hits of the year. And now, this popular on-screen pair will next be seen in the upcoming film Satya Prem Ki Katha. While fans can’t contain their excitement, here is the latest update about the film.

On Monday, Kartik Aaryan shared an Instagram story wherein we can see that the actor has resumed working on the film sets. He captioned his story by saying “Back to Work” and disclosed that he is in Mumbai for the same. 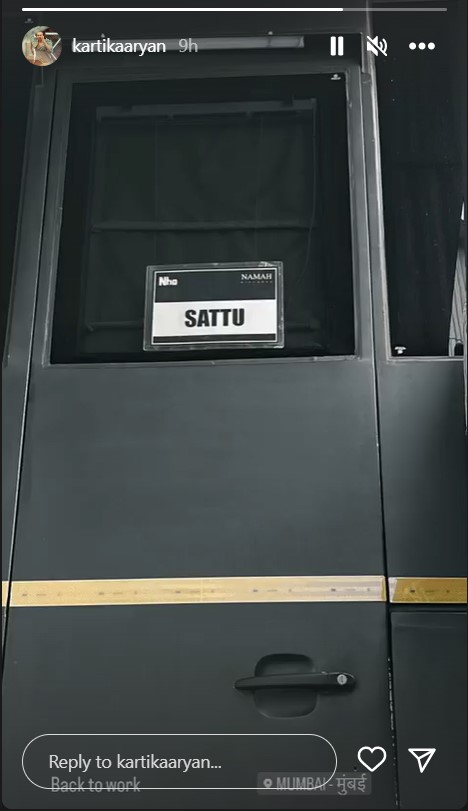 For the unversed, the film stars Kiara Advani and Kartik Aryan in lead roles. The movie will be directed by popular filmmaker Sameer Vidwans.

Recently, in September, Kiara opened up on his equation with Kartik Aaryan to Hello! Magazine. She, in an interview with the publication, said, “Fortunately, our pairing (Kartik and herself) really worked well in Bhool Bhulaiyaa 2… We started off on such a great note. We’ve begun to prep for the film and will be shooting later this month together. I’m excited to be working with him once again! It’s a love story, my favourite genre, where I play Katha, and he plays Satya. My last was Kabir Singh, which everyone loved.”

Meanwhile, Aaryan will next be seen in a remake of the Telugu film Ala Vaikunthapurramuloo, titled Shehzada. Besides this, he is also working on director Shashanka Ghosh's film Freddy. Later, Aaryan will also star in the musical drama Aashiqui 3. Surely, the actor has a bunch of movies to look forward to on his platter.