Shahid Kapoor and Mira Rajput are currently enjoying their time during their family vacation in Europe. Shahid Kapoor and Mira Rajput are one of the most adored couples. The duo got married in a private wedding ceremony in New Delhi on 7 July 2015 and the news of the same took the internet by storm. They also have two beautiful children, a daughter named Misha and a son named Zain. Ever since then, the power couple is often seen treating fans with their mushy pics and glimpses of their happy moments with family. The family has been enjoying their vacation time in different countries of Europe, in the midst of nature and scenic beauty.

Both Shahid Kapoor and Mira Rajput are very active on Instagram and keep their followers posted with whatever is going on in their lives. Since the last few weeks, the power couple has been treating their followers with some amazing clicks from their vacation in different countries of Europe. The have travelled to UK, Italy and Switzerland among other countries. Both Shahid and Mira took to Instagram to share clicks from a restaurant they visited. They looked very fresh together. Mira wore a floral printed pink dress while Shahid wore a classy blue t-shirt. The Jersey actor, through his story, suggested that he was "Hangry" which loosely translates as hungry plus angry. Mira shared a couple of Instagram stories too. In the first one, she claimed that Shahid was going "bananas", probably because of the delay of his food order. Mira also took a jibe at her husband in her next story as she captioned it as, "He thinks he's funny". This fun banter only shows the deep bond that the both have for eachother, doses of love and goofiness.

Have a look at the photos shared by Shahid Kapoor and Mira Rajput on their Instagram stories: Meanwhile, talking about the work front, Shahid Kapoor has some interesting projects in the pipeline. The actor will be seen making his OTT debut with Raj & DK’s next titled Farzi, co-starring Vijay Sethupathi and Raashii Khanna. On the other hand, the Kabir Singh actor has collaborated with Ali Abbas Zafar for the first time for an action entertainer. Earlier, Pinkvilla had exclusively reported that Diana Penty has been roped in to play the lead in the project. 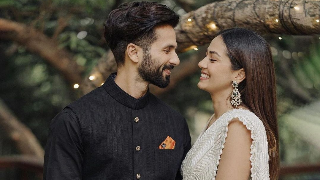