Alia Bhatt will be essaying the role of Keya Dhawan in Heart of Stone. A file image of Alia and Neetu

Alia Bhatt’s Hollywood debut film ‘Heart of Stone’ first look has been unveiled on Saturday. It also stars Gal Gadot and Jamie Dornan. The video was revealed at Tudum: A Netflix Global Fan Event on the streaming platform’s YouTube channel. The actress too shared the first look of Heart of Stone on her Instagram handle. As soon as she shared the look, many fans flooded the comments section and dropped fire, heart emojis. Arjun Kapoor and Varun Dhawan too praised the actress.

Neetu Kapoor, mother-in-law of Alia, also cheered for her and shared the first look on her Instagram stories. She even used a heart emoji along with dancing girl emoji. It is worth mentioning here that both Alia and Neetu share a good relationship. Alia's mom Soni Razdan also commented, "Oh fab!!! This is looking so, so exciting !" Actor Arjun Kapoor wrote, "It’s a biggish… proud." Coming to the look, Gal introduces her character as CIA agent Rachel Stone. Much is not revealed about Alia's character in the first look.

To note, Alia is essaying the role of Keya Dhawan in the film. Directed by Tom Harper, it also stars Sophie Okonedo, Matthias Schweighöfer, Jing Lusi, and Paul Ready. 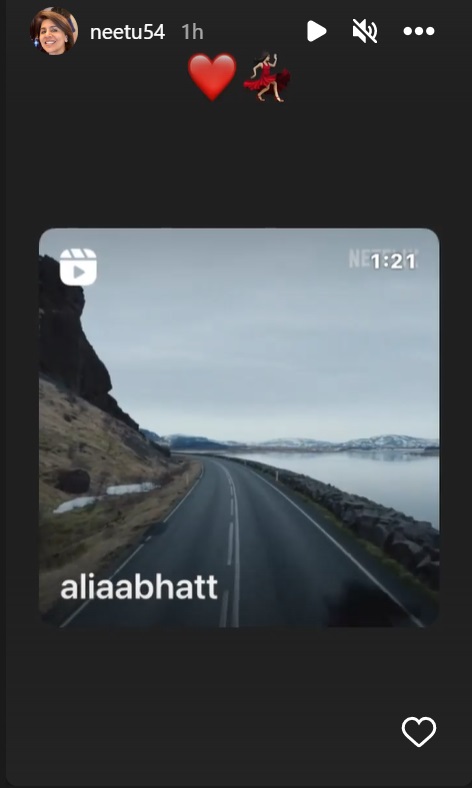 It is worth mentioning here that the actress is expecting her first child this year. On the work front, she will be next seen in Rocky Aur Rani Ki Prem Kahani co-starring Ranveer Singh. She was last seen in Brahmastra with Ranbir Kapoor.

Also Read: Alia Bhatt drops glimpse of her look from Heart of Stone as she wraps shoot; Thanks co-actor Gal Gadot