Rishabh Pant recently made it to the headlines after he met with a major car accident. He suffered from major injuries after his car rammed into road dividers. Rishabh Pant recently made it to the headlines after he met with a major car accident. According to reports, the wicketkeeper-batsman met with an accident near Uttarakhand’s Roorkee. He suffered from major injuries after his car rammed into road dividers and later caught fire. It is said that he was on his way to his hometown Roorkee from Delhi when the accident occurred. After being initially admitted to a private hospital in Roorkee, Pant was later referred to a hospital in Dehradun. He has reportedly suffered injuries on the head, along with a ligament injury on his right ankle, police sources said. Recently, the cricketer was shifted to Mumbai’s Kokilaben hospital and we have already shown you videos from the hospital. Well, Urvashi Rautela who is often linked to the cricketer has been grabbing all the eyeballs for her posts on social media related to Rishabh. The recent one being a picture of Kokilaben Hospital.

Urvashi Rautela and Rishabh Pant’s banter started on social media a couple of months ago and that is when fans started linking up these two. After the news of Rishabh’s accident came out, Urvashi grabbed all the eyeballs with her post on Instagram where she shared a picture of herself and captioned it as praying. Later we saw her mother too praying for the cricketer’s speedy recovery on social media. Now, the actress has once again made it to the headlines as she has shared a picture of Mumbai’s Kokilaben Hospital where the cricketer is admitted currently. This story left fans wondering if she had paid him a visit. Following this, Urvashi was brutally trolled as fans called out the actress for harassing Pant. 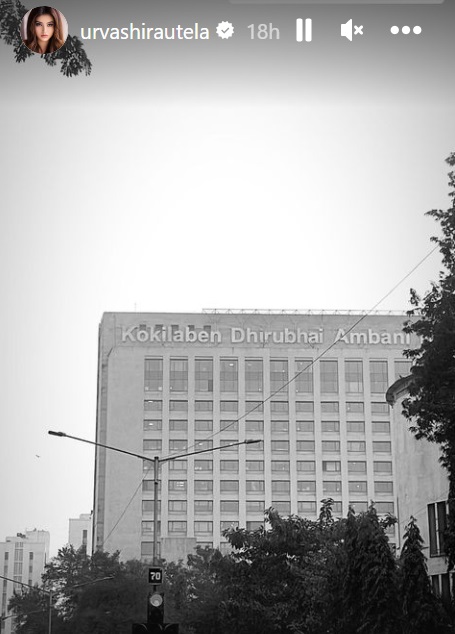 As soon as Urvashi Rautela shared the photo of the hospital, netizens began trolling her. Sharing the screenshot of her Instagram story, a user wrote, "This is mental harassment. If a man did this, he’d either be in jail or have a Netflix crime documentary in his name." Another said, "If you feel this is absolutely sick & @UrvashiRautela needs to be finally called out for it, please tag her and say #GetWellSoonUrvashi." Some even called her "stalker." One user even wrote, “When they will issue notice to #UrvashiRautela for stalking a man.” Another wrote, “Such a Cheap Tricks For Fame . He is Not Well went Through a Major accident . This is Not entertainment anymore this is mental Harassment !”

Recently, a video was going viral on social media where we can see an ambulance arriving at Mumbai’s Kokilaben hospital. The ambulance was followed by a Police van and paparazzi ran behind the ambulance to get a glimpse of Rishabh Pant. In the ambulance, we can see a stretcher on which the cricketer was lying, all covered in blankets. There was medical staff too present in the van. As per the BCCI, Pant “will be under the direct supervision of Dr. Dinshaw Pardiwala, Head - the Centre for Sports Medicine, and Director- Arthroscopy and Shoulder Service at the hospital.” Pant will continue to be monitored by the BCCI medical team throughout his recovery and rehabilitation. “The Board will make every effort to aid and expedite the recovery process of [Pant] and will provide him with all the support he needs during this period.”

Today ahead of the release of his much-awaited film Pathaan, Shah Rukh Khan started an Ask SRK session on his Twitter. One of the fan during that session asked him, “@iamsrk Please send good wishes to rishabh pant for his speedy recovery..#AskSRK.” To this SRK replied, “Inshaallah he will be well soon. He is a fighter and a very tough guy.”

Urvashi Rautela sizzles in a red attire as she pos...

Urvashi Rautela is baffled as her mom sends her Vi...

Urvashi Rautela gears up for her first women-centr...

EXCLUSIVE: I will fit well in a superwoman's role ...