Netizens go gaga over Alia Bhatt after she was spotted at Shaheen Bhatt’s birthday, call her ‘gold mom’

This is the year for Alia Bhatt, both professionally and personally. From getting married to now becoming a mother of a baby girl Raha, Alia sure is on cloud 9. Netizens go gaga over Alia Bhatt after she was spotted at Shaheen Bhatt’s birthday, call her ‘gold mom’

This is the year for Alia Bhatt, both professionally and personally. 2022 has brought a lot of happiness to her life. From getting married to now becoming a mother of a baby girl, Alia sure is on cloud 9. The actress is one of the paparazzi’s favourite stars to get clicked whenever she steps out of her house. But ever since, she came back from the hospital after welcoming her daughter Raha Kapoor into the world. The star has been away from the media’s glaze. But last night, she was spotted after a long time with mom Soni Razdan as they had come to celebrate Shaheen Bhatt’s birthday together. It was a visual treat for the fans to look at her and the comments section is filled with such sweet comments from fans who are going gaga over her.

Last night Alia Bhatt looked beautiful in her simple casual attire. She wore a black tee and layered it with a black shrug that she paired with blue baggy denim. The actress tied her hair in a bun and paired golden hoops. Indeed she had a glow on her face and everyone just loved it. One fan praised Raha Kapoor’s name and wrote, “So sweet name or different also.” Another fan wrote, “Only love for her. She is such a darling. May God bless her family.” A third fan wrote, “Always my favorite aloo.” Someone also wrote, “So pretty”. Well, there was someone who even called her ‘goldmom’.

Check out the comments: 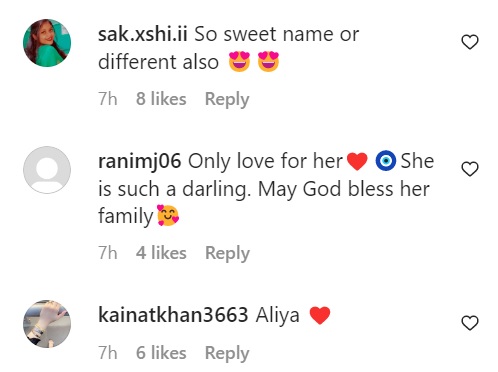 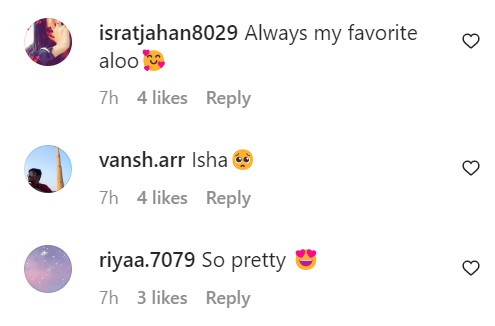 Alia Bhatt and Shaheen Bhatt never fail to exude sister goals. On Monday, Alia dropped an unseen picture from her wedding celebrations, wherein she can be seen smiling cutely at Shaheen. She captioned this photo as, “Happy Birthday to the BEST person ever ... my sweetie ... my little melon smiggle pop. I love you so much that no amount of cute and sweet-sounding words will ever be enough. Okay bye, calling you in one hour." Shaheen is celebrating her 34th birthday today.

Alia was last seen in Brahmastra with Ranbir Kapoor. She will next be seen in Karan Johar’s Rocky Aur Rani Ki Prem Kahani alongside Ranveer Singh.

Anonymous
Nov 30, 2022
Her cunning paid off. Trapped the guy she wanted by getting preggers so he had to marry her and got an instant family. Now only prob will be keeping him?
0 REPLY See More answers

Anonymous
Nov 29, 2022
she was not looking happy. evry girl with RK look like this lol
0 REPLY See More answers

Anonymous
Nov 29, 2022
bully weed exaggerations ae so phony. The more exaggerated the more they are paid to write it.
0 REPLY
View more comments