Sonam Kapoor and hubby Anand Ahuja welcomed their first child on the 20th of August. Sonam Kapoor and Anand Ahuja are brand-new parents in the tinsel town of Bollywood. The couple welcomed their first child – a baby boy – on the 20th of August this year. They took to their social media spaces to announce the wonderful news with friends, followers, and well-wishers. It has been only a couple of weeks and it looks like Sonam is fully enjoying this new experience and phase in her life. Speaking of which, a few minutes back, she took to the stories feature on Instagram and shared a hilarious revelation she has had as a new mommy. Have you seen it yet?

Some time back, Sonam Kapoor took to the story feature on her Instagram space and shared a revelation she had. The Neerja actress wrote, “Only burps that are cute are baby burps (baby emoji) (milk bottle emoji)”.  Adorable, don’t you think? 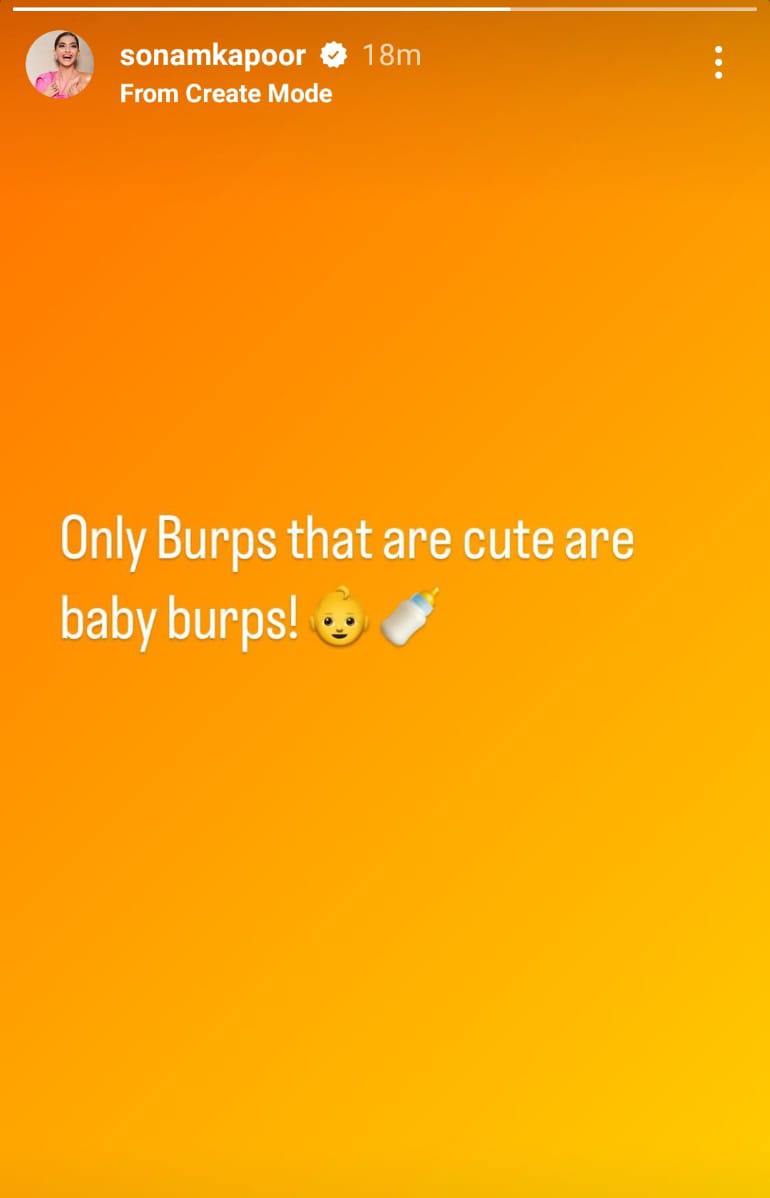 Sonam and Anand took to their social media handles and announced their baby's arrival in a joint statement, that read: "On 20.08.2022, we welcomed our beautiful baby boy with bowed heads and hearts. Thank you to all of the doctors, nurses, friends, and family who have supported us on this journey. It's only the beginning but we know our lives are forever changed. - Sonam and Anand." She added a blue heart emoji as the caption of her baby announcement.

The Neerja actress, who shot a cover spread with Vogue India magazine recently, shared her thoughts on becoming a mother at 37. She shared that she had to take progesterone shots on her thighs and stomach because of her late pregnancy. Sonam said that she was constantly throwing up, sick, and bedridden. "Everyone’s so tense about women who get pregnant after 31 or 32. They tell you don’t do this, don’t do that, don’t get gestational diabetes or pre-eclampsia. I was like, “Wait, hang on, I still feel very young. I’ve got my dad’s (Anil Kapoor) genes, I look very young. It’ll be fine," said Sonam Kapoor.

On the work front, Sonam will be seen next in Blind, which will also star Purab Kohli, Vinay Pathak, and Lillete Dubey. It is a remake of the 2011 Korean film of the same name.

ALSO READ: Sonam Kapoor on changing priorities as a new mom: It is a very selfish decision