On dad Shah Rukh Khan's 'T-shirt is mine' comment on his pictures, Aryan Khan says 'Your genes too'

Shah Rukh Khan and Aryan Khan’s fun banter is the cutest thing on the internet today. On dad Shah Rukh Khan's 'T-shirt is mine' comment on his pictures, Aryan Khan says 'Your genes too'

Aryan Khan is one of the most popular star kids on the Bollywood block. Megastar Shah Rukh Khan and Gauri Khan’s eldest son Aryan has not made his debut in showbiz yet but the young lad surely plans to delve into the world of entertainment. Pinkvilla was the first to exclusively report that Aryan is all set to make his debut as a writer. Meanwhile, Aryan rarely posts stuff on social media, but every time he does, he manages to break the Internet with his stunning pictures. The star kid recently dropped some amazing pictures from his latest photoshoot that have sent the Internet into a frenzy. Apart from the dashing pictures, it is Shah Rukh Khan’s comment on his post that is garnering a whole lot of attention and now Aryan has responded to his comment and it is adorable.

Shah Rukh Khan praised Aryan in the comment section and also pointed out that the grey t-shirt he is wearing was his. “Looking really good!!…and as they say, that whatever is silent in the father…. speaks in the son. By the way is that grey t-shirt mine!!!” wrote Shah Rukh. Aryan replied to his comment and wrote, “Your genes and T-shirt, haha.” Well, we agree with you here, Aryan! Like Poo would say- Good looks, good looks and good looks!!

Have a look at the comments: 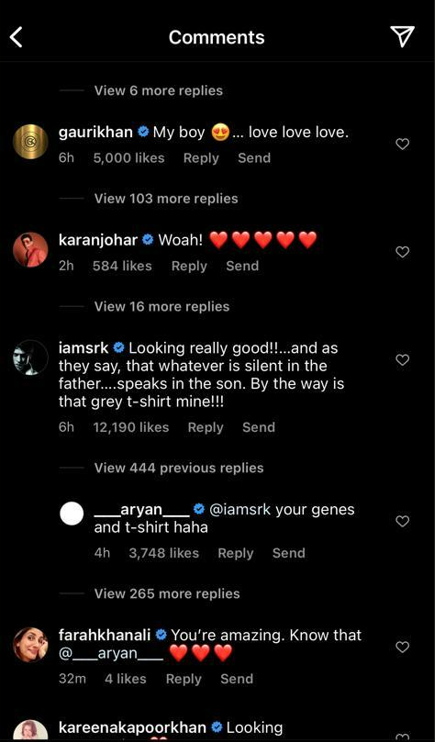 Khan has been hogging the limelight ever since the controversial cruise rave party. Later, Aryan got a clean chit from the NCB. Recently, Pinkvilla reported that Aryan has started work on his web show and even did a test shoot for the same in Mumbai. We were the first to report that Aryan Khan is developing multiple ideas, of which a web series and a feature film created by him for Red Chillies Entertainment are at the forefront.