Check out Shraddha Kapoor’s latest selfies on the ‘gram. Shraddha Kapoor is one of the most gorgeous and talented actresses in Bollywood. She rose to fame early on in her career with Aashiqui 2, which was a major blockbuster after its release. The actress often rules hearts with her beautiful and elegant fashion choices. Shraddha also enjoys a massive fan following on social media and never fails to impress fans with her simplicity. Lately, the Stree actress has been serving looks after looks of her Navratri celebrations as she drops photos of her in outfits that coordinate with the colour for each day of the festival.

Speaking of which, on day four of the nine days festivities, Shraddha shared pictures of herself wearing yellow colour. Day four of Navratri is associated with the colour yellow. Talking to her Instagram stories, the 35-year-old actress shared a collage of 4 pictures and captioned it, “Navratri Day 4 YELLOW (yellow heart emoji) Happiness and Cheer! #9Ratri9Rang.” 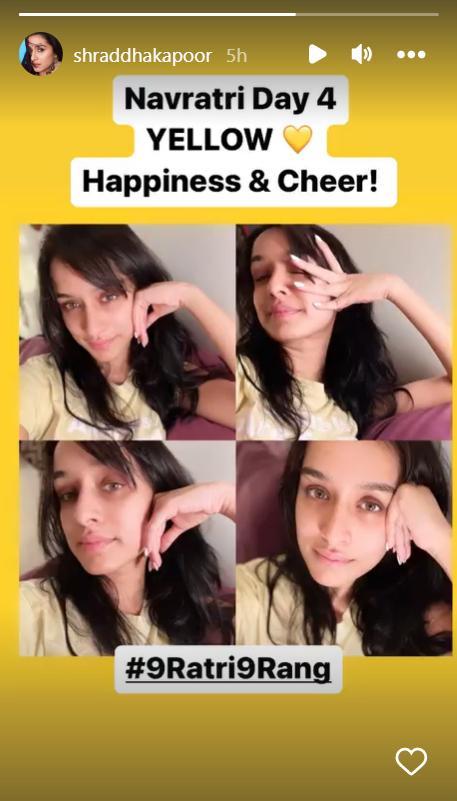 On the work front, Shraddha Kapoor was last seen in Baaghi 3 alongside Tiger Shroff. She now has Luv Ranjan’s untitled romantic comedy-drama with Ranbir Kapoor. The film is bankrolled by Luv Films and T-Series. The on-screen couple attended their director Luv Ranjan’s intimate wedding in Rajasthan earlier this year. They shot for the film in Spain last month and wrapped up the shoot for their film, in Mauritius in July. The film will be released on Holi 2023. Apart from this, she is also working on her comedy project with director Pankaj Parashar titled Chaalbaaz In London.

Moreover, she has been also roped in to play the lead role in the upcoming trilogy helmed by Nikhil Dwivedi, which is said to be based on the myth of Naagin. The rumour mills suggest that she is also a part of the Tezaab remake, which features Kartik Aaryan in the lead role.