Directed by Mudassar Aziz, the film Pati Patni Aur Woh was released on December 6, 2019, at the theatres. As three years have passed by, the lead cast of the film has dropped special messages. Directed by Mudassar Aziz, the film Pati Patni Aur Woh was released on December 6, 2019, at the theatres. (Image Credits: T-Series)

Kartik Aaryan, Ananya Panday, and Bhumi Pednekar indeed had a very memorable 2022. Kartik Aaryan has been widely appreciated for his work in films namely Bhool Bhulaiyaa 2 and Freddy. Ananya Panday’s performance was also noted in the film Liger and Gehraiyaan. Adding up, Bhumi Pednekar’s role in Raksha Bandhan was also appreciated. On Tuesday, these top actors dropped heartfelt messages marking the third anniversary of their film ‘Pati, Patni Aur Woh.’

In the latest development, the lead cast of the film Pati, Patni Aur Woh dropped heartfelt messages as the film clocked 3 years since its release at the theatres.

Kartik Aaryan shared a video and recalled working in the film. He captioned, “Three years to this. #PatiPatniAurWoh #DheemeDheeme. Thank you for all the love.”

Ananya Panday also shared a video while working on the sets of Pati, Patni Aur Woh. In the video, Kartik, Bhumi, Ananya, and Aparshakti Khurana can be seen together in a frame. In the caption, she dropped a memorable note which read, “#3YearsOfPatiPatniAurWoh. The most fun film to shoot with this amazing bunch of people, it still feels like yesterday. A film that keeps on giving with all the love and laughter we still receive for it till date. Go watch it on @primevideoin. I promise you’ll have too much fun.”

Bhumi Pednekar dropped a sweet message for director Mudassar and team which read, “3 years ago #PatiPatniAurWoh released and here we are today shooting yet another one. To many many more Mudassar sir.” 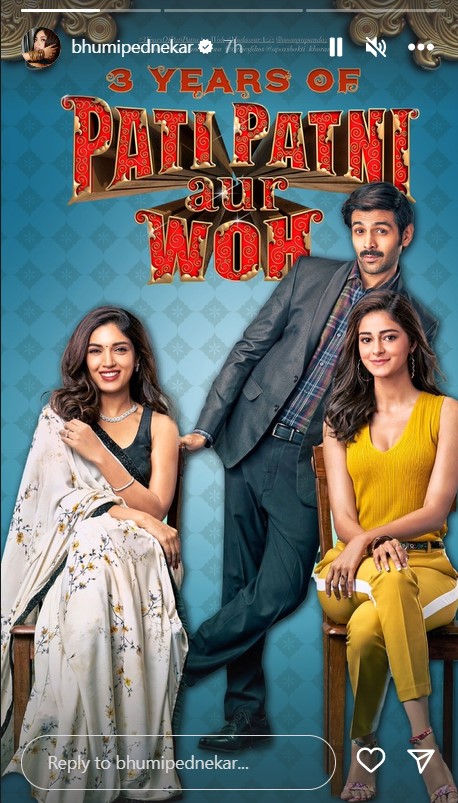 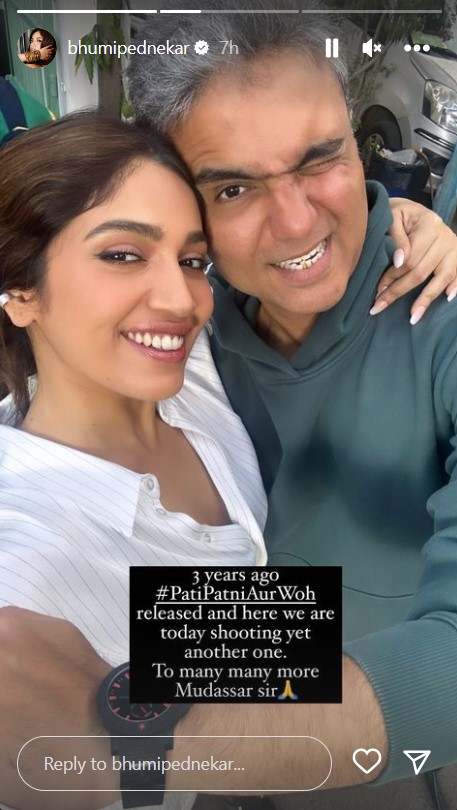 Kartik Aaryan has a couple of projects lined up at the moment. Aaryan will next star with Kriti Sanon in the film Shehzada, and later with Kiara Advani in the romantic drama Satyaprem Ki Katha.

Ananya Panday, on the other hand, will next appear in the film Kho Gaye Hum Kahan alongside Siddhant Chaturvedi and Adarsh Gourav. Later, she will be seen in the film Dream Girl 2 alongside Ayushmann Khurrana.

Bhumi also has a couple of projects in her kitty. Pednekar will next star in Shashank Khaitan's comic thriller Govinda Naam Mera, co-starring Vicky Kaushal and Kiara Advani, which will release on Disney+ Hotstar. Later, she will be seen on screen with Rajkummar Rao in Anubhav Sinha's thriller Bheed.

Also Read: Kartik Aaryan starrer Freddy to get a sequel?

2 Years of Pati Patni Aur Woh: How the ending emph...

Anonymous
Dec 07, 2022
The Great Historical Magnum Opus, Panipat:The Great Betrayal which gave details about Selfless Courage, Forgotten Sacrifices, Unshakable Determination, much more of The Great Marathas has clocked 3 Years too. Pls PINKVILLA write something about it too...
0 REPLY