Arjun Kapoor and Ranbir Kapoor share a warm bond and we all already know that. It was only yesterday that the Gunday star shared a fun picture of him and Ranbir to wish the Brahmastra star on his birthday. On the work front, we know that Ranbir will be seen in Luv Ranjan’s rom-com with Shraddha Kapoor for which the team has been really working hard. Fans are very excited to get all the information about this film and moreover to know the title of the film. But the one person who is eagerly waiting for the film is non-other than Arjun Kapoor. Today on Luv’s birthday he has shared an unseen picture from the director’s wedding and also asked him about the title of his film.

The picture which Arjun Kapoor shared seems to be from Luv Ranjan’s haldi ceremony. In the picture, we can see Ranbir Kapoor dressed in a white kurta with a little bit of haldi smudged on it as he kisses Luv on his cheeks. Ranbir is also wearing black sunglasses. The best part about the picture is a goofy Arjun Kapoor who is smiling for the camera. Sharing this picture, Arjun wrote, “Kapoor’s ke beech mein LUV hai…literally…Happy Birthday, ab to title bata de film ka!!!” 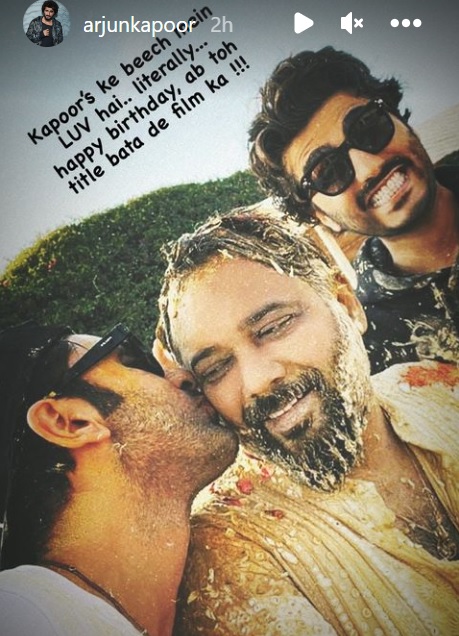 Meanwhile, on the work front, Ranbir Kapoor has a couple of exciting projects lined up. He will next be seen in Luv Ranjan’s rom-com alongside Shraddha Kapoor. He has Sandeep Reddy Vanga’s Animal alongside Anil Kapoor and Rashmika Mandanna.

Talking about Arjun Kapoor, he will next feature in Kuttey with Tabu, Konkona Sen Sharma, Radhika Madan, Naseeruddin Shah, and Kumud Mishra. He also has The Lady Killer with Bhumi Pednekar and he is currently in Glasgow shooting for yet another film with Bhumi.