A BTS photo of Ranbir Kapoor, Alia Bhatt and Ayan Mukerji from Brahmastra

Ranbir Kapoor and Alia Bhatt starrer Brahmastra is finally here! It is one of the most-anticipated films of the year and is directed by Ayan Mukerji and has been released in theatres in four other languages – Tamil, Telugu, Kannada, and Malayalam. Brahmastra: Part One– Shiva also features Amitabh Bachchan, Mouni Roy, and Nagarjuna Akkineni in pivotal roles. Shah Rukh Khan will also be making a special appearance in the Ranbir-Alia starrer and will be essaying the role of 'Vanar Astra.'

Now, as the movie has finally hit the cinemas, producer Karan Johar expressed his excitement on his social media. The Kuch Kuch Hota Hai filmmaker shared a behind-the-scenes picture of Alia Bhatt, Ranbir Kapoor, and Ayan Mukerji from Brahmastra. Taking to his Instagram story, KJo captioned it: "It's here! #Brahmastra." The picture shows Ayan with Alia and Ranbir in front of him. All of them are sitting on a patch of artificial grass. It was originally shared by Ayan on his Instagram handle in 2021. 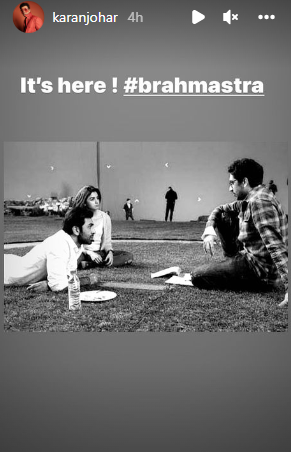 Meanwhile, on Thursday, the makers organised a special screening which was attended by Ranbir Kapoor, Alia Bhatt, Ayan Mukerji and Alia's sister Shaheen Bhatt, her father, and filmmaker Mahesh Bhatt. Others who attended the event included Shanaya Kapoor, Randeep Hooda and others.

This marks Ranbir's third collaboration with Ayan after Wake Up Sid (2009) and Yeh Jawaani Hai Deewani (2013). While Alia and Ayan are collaborating for the first time. Brahmastra has been almost a decade in making and five years in production. It is one of the most expensive Indian films to date and has reportedly been produced on a budget of over Rs 400 crore. The film is intended to serve as the first film in a planned trilogy as part of its own cinematic universe called Astraverse.