Shanaya Kapoor is one of the most popular star kids on the block. Even before becoming a part of the showbiz, Sanjay Kapoor’s daughter is no less than a Bollywood diva as she often makes it a point to turn heads with her exquisite fashion sense whenever she appears in public. The star kid has a huge social media fan base and occasionally surprises her fans with beautiful photos and videos. Speaking of which, she recently posted a set of pictures of herself in a glamorous blue dress on Instagram, but what caught our attention was her BFF Suhana Khan's comment on it.

On Wednesday, sharing a few pictures on Instagram, Shanaya wrote, "There is a shade of blue for every girl" with a tongue-out emoji and a blue heart emoji. Her best friend, Suhana Khan, who was soon enough to respond to her post, wrote, "Stunning" with a star-eyed emoji in the post's comments section. Shanaya’s mother and Fabulous Lives Of Bollywood Wives star Maheep Kapoor and her co-star Neelam Kothari too reacted to her post. While Maheep dropped blue hearts and the evil eye emoji in the comments section, Neelam dropped sparkling heart emojis. 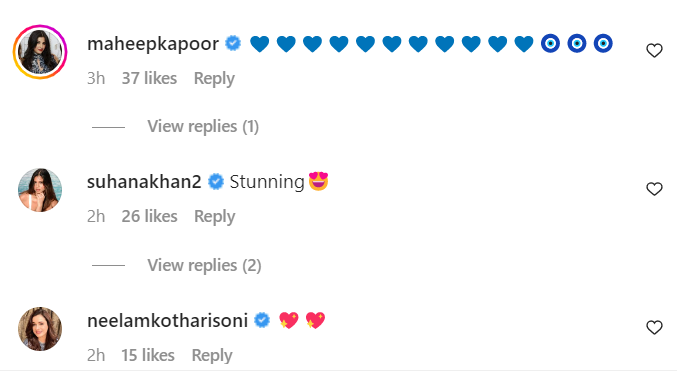 Shanaya and Suhana had recently been on a vacation to Dubai with their mothers Maheep Kapoor and Gauri Khan respectively. A few days ago, Shanaya shared a set of pictures of herself on her Instagram handle from Dubai. In the pictures, Shanaya can be seen wearing a white dress. According to her captions, her BFF Suhana Khan took those pictures for her.

On the work front, Shanaya is all set to make her big Bollywood debut with Karan Johar's Bedhadak. Karan Johar’s Dharma Productions will launch Shanaya in Bedhadak, which will also star Gurfateh Pirzada, best known for Netflix original Guilty, and another newcomer, Lakshya Lalwani. It will be directed by Shashank Khaitan, known for Badrinath Ki Dulhania and Dhadak.

On the other hand, Suhana Khan, daughter of Shah Rukh Khan and Gauri Khan, will soon be making her Bollywood debut with Zoya Akhtar's The Archies. Shanaya Kapoor in a Lovers and Friends mini dress ...