Priyanka Chopra and Nick Jonas, who tied the knot on 1 December 2018 in Jodhpur, recently attended a Diwali party hosted by a friend in Los Angeles. Check out the photo. Priyanka Chopra is a global icon today and is married to American singer-actor Nick Jonas. The couple has always managed to steal the limelight with their adorable posts on social media. Whenever they step out, the duo always makes a splash with their sartorial picks. The couple did exactly that as they attended a friend’s Diwali bash in Los Angeles, where they currently reside. Now, we have recently come across an unseen photo of Priyanka and Nick enjoying the party.

Priyanka's agent Anjula Acharia posted the picture on her Instagram story. She captioned it as: "Diwali nights in LA" and also tagged all her guests. In the photo, the Bajirao Mastani actress can be seen looking stunning as ever as she donned a full-sleeve pink dress and paired it with matching heels. Nick, on the other hand, wore a black and white sweater, which was paired with black pants. and shoes. PeeCee's agent also gave her followers a sneak peek of the decorations. 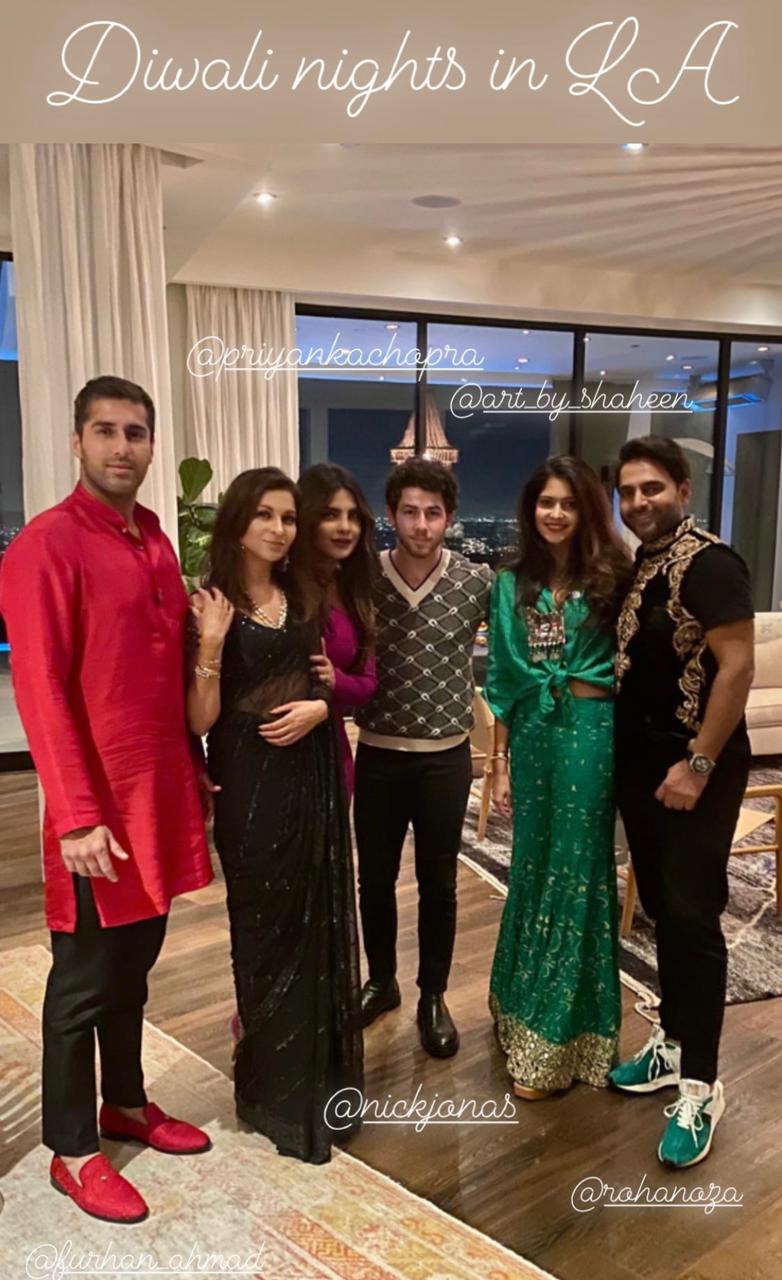 Meanwhile, Priyanka and Nick celebrated their first Diwali with their daughter Malti Marie Chopra Jonas this year. The actress shared a series of pictures from the celebrations on her social media handle from the Diwali celebrations at her and Nick's Los Angeles home. She wrote: "Love, peace and prosperity to all. From a heart truly laden with gratitude, I wish you all a Happy Diwali. Sorry I'm a little late but decided to stay in the moment just a little bit longer... From ours to yours. Love and light." Further, tagging her brother, she wrote: "Missed you Siddharth Chopra." Jonas too shared pictures from the Diwali festivities and wrote: "Such a beautiful Diwali celebration with my love. Happy Diwali everyone. Sending joy and light to you all."

On the work front, Priyanka recently visited New York for the United Nations General Assembly as one of the speakers at the Global event. The actress also has many projects in her pipeline. She will star in the Hollywood film It's All Coming Back To Me with Sam Heughan and Amazon Prime Video's web show Citadel.

Priyanka is also set to star in Farhan Akhtar's directorial Jee Le Zaraa alongside Katrina Kaif and Alia Bhatt. This also marks her return to the Hindi silver screen after the 2019 film, The Sky Is Pink, directed by Shonali Bose and also starred Farhan Akhtar, Zaira Wasim, and Rohit Saraf in the lead roles.

Anonymous
Oct 31, 2022
Priyanka the rebound is over...get divorced from this kid and marry someone your age ! You deserve somebody intelligent
0 REPLY

Anonymous
Oct 31, 2022
Are they still kids to be called adorable? What kind of publicity stunt is this?
0 REPLY

Anonymous
Oct 30, 2022
When are they get drovice I can’t stand priyaka
0 REPLY See More answers

Anonymous
Oct 30, 2022
At least fully covered in the company of Indians.. What a hypocrite. Almost expected to see a portion of her body hanging out.
0 REPLY See More answers
View more comments