Priyanka Chopra and Nick Jonas are celebrating their 4th wedding anniversary today, and PeeCee’s bestie Tamanna Dutt has shared an unseen picture of the lovely couple on this occasion. Priyanka Chopra and Nick Jonas never fail to shell out couple goals. From sharing love-filled pictures together, to dropping adorable comments on each other’s posts- Nick and Priyanka always leave their fans swooning over them. Priyanka and Nick, who tied the knot four years ago in a grand ceremony at the Umaid Bhawan Palace in Rajasthan, are celebrating their wedding anniversary today. Wishes from their family members, fans and friends have been pouring in on social media. Priyanka’s bestie Tamanna Dutt also wished the couple by sharing an unseen picture, and it is just so adorable!

Priyanka Chopra’s friend Tamanna Dutt took to her Instagram story to post a picture of Priyanka and Nick. The picture shows the couple with their arms around each other as they watch fireworks on the beach. While Nick can be seen in an orange and black printed shirt and pants, Priyanka looks stunning in a bright pink gown. Sharing the romantic picture, Tamanna wrote, “Happy Anniversary! Here’s to always celebrating every day every moment when you are together." Check out the picture below. 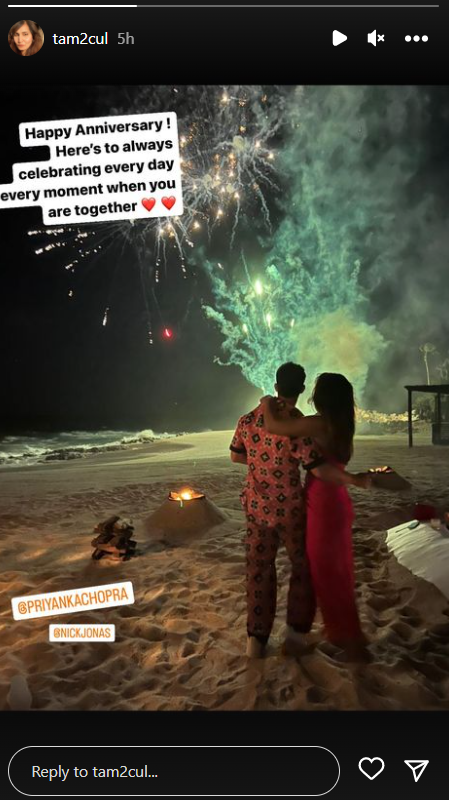 Priyanka Chopra and Nick Jonas first interacted via Twitter in 2016 after Nick slipped into PeeCee’s DM with a causal message. They first met in 2017 at the Vanity Fairs Oscars after-party after which they attended the Met Gala together.

They tied the knot in December 2018 in a three-day grand wedding celebration that consisted of both Christian and Hindu marriage traditions. They welcomed their daughter, Malti Marie Jonas, via surrogacy in January this year.

On the professional front, Priyanka Chopra will next be seen in Citadel, which is produced by the Russo Brothers. She also has Love Again, and the Bollywood movie Jee Le Zaraa, alongside Katrina Kaif and Alia Bhatt in the pipeline.

Anonymous
Dec 02, 2022
Insecure woman. Noone wanted to marry her in India.
0 REPLY

Anonymous
Dec 02, 2022
In usa they this women is a witch prays to demons and so black magic looks true ugh so ugly she is even an afti will puke on her how can be with her
0 REPLY

Anonymous
Dec 01, 2022
Take a vacation click millions of pictures to post in next few months to come across as lovey dovey couple , so pathetic and made up
0 REPLY See More answers
View more (5) comments