Priyanka Chopra is one of the most loved actresses in Bollywood. She has been juggling her professional life and mommy duties like a pro and fans are only waiting for her to reveal Malti’s face. Priyanka Chopra is one of the most loved actresses in Bollywood. She is not only a star in India but is well-known across the globe. Her popularity seems no boundaries and fans just love her. Well, the actress recently stepped into motherhood and welcomed her first child with hubby Nick Jonas. Ever since Malti has come into their lives, the couple seems to be on cloud 9. Priyanka has been juggling her professional life and mommy duties like a pro and fans are only waiting for her to reveal Malti’s face. The actress often gives a glimpse of Malti on her Instagram page and today we observed that her new Instagram display picture has her cute little daughter in it.

In Priyanka Chopra’s Instagram display picture we can see the actress has clicked a selfie. In the picture, the actress sports a no-makeup look while her cute little daughter Malti is sitting on her lap. The selfie is taken from a top angle so this has hidden Malti’s face perfectly. It is indeed too cute to handle.

Priyanka Chopra shares a picture of Malti with Siddharth Chopra

Priyanka Chopra took to her Instagram handle to share a picture of her brother Siddharth Chopra who is holding Malti in his arms. Malti is facing her back towards the camera and Sidharth is cutely looking at her. 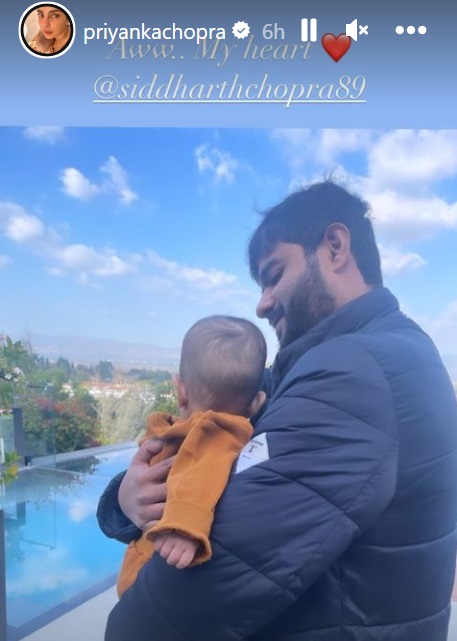 Priyanka Chopra is the most-followed Indian actress on Instagram with over 83.6 million Instagram followers. Chopra has a couple of projects lined up at the moment. Chopra will next be seen in the American film ‘Love Again’ alongside actors Sam Heughan and Celine Dion. Later, she will star alongside Hollywood actor Richard Madden in Amazon Prime Video's thriller series Citadel.

In the world of Bollywood, she will be seen next in Farhan Akhtar’s directorial alongside high-profile Bollywood actors Alia Bhatt and Katrina Kaif. This film is expected to go on floors soon.

ALSO READ: Priyanka Chopra has an epic response on being called a ‘satanic worshipper’; Check out

Anonymous
Dec 08, 2022
Instagram pays. With movie offers drying up she has to pose for Instagram including dragging an innocent baby.
0 REPLY

Anonymous
Dec 01, 2022
seh has become several shades lighter since her miss world days . and she gives a lecture on racism . wow .
0 REPLY

Anonymous
Nov 30, 2022
Noake up from surgery to whitening to full on make up LoL
0 REPLY