Rajkummar Rao says ‘there’s no one like Shah Rukh Khan’; Shares his review after watching Pathaan Rajkummar Rao says ‘there’s no one like Shah Rukh Khan’; Shares his review after watching Pathaan

Shah Rukh Khan starrer Pathaan released in theatres yesterday, and received a great response! Many Bollywood celebrities such as Karan Johar, Raveena Tandon, and others, who watched the movie on the first day, shared their thoughts about the film through posts on social media. Rajkummar Rao and his wife Patralekhaa were also spotted by the paparazzi yesterday as they headed to the theatre to watch Pathaan. After watching the movie, Rajkummar was seen saying that it is a brilliant movie, and that it was so much fun watching Shah Rukh Khan on the big screen after such a long gap. Without giving any spoilers, he shared that the end scene was amazing, and the action sequences were brilliant.

Now, Rajkummar Rao took to his Instagram to share a still from Pathaan, and shared his review. On his Instagram story, he urged fans to go watch Pathaan in theatres to witness the craze. He also heaped praises on Shah Rukh Khan, and wrote that there’s no one like him. “Go watch Pathaan and witness the craze, whistling and shouting in cinemas. It's such a good feeling to watch our superstar doing such crazy action sequences. We missed you sir and Hats off to you @iamsrk sir. There's no one like you,” wrote Rajkummar Rao. 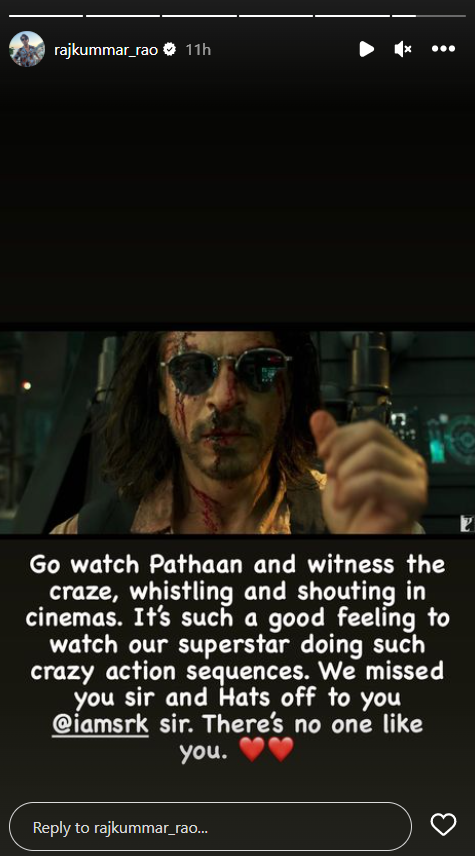 Karan Johar also shared an Instagram post praising Pathaan. He wrote that he doesn’t remember the last time he had such a fun time at the movies, and called Pathaan a ‘blockbuster’. He praised SRK, Deepika and John’s performances, as well as director Siddharth Anand for brilliantly directing the film. He praised Aditya Chopra for his vision, and gushed over SRK, calling him the ‘King’ of Bollywood. “PATHAAN MUBARAK to alll!!!! ( no spoiler but the Best sequence of the film is with BHAI and BHAIJAAN) I stood up and clapped!!!!" wrote KJo.

Anonymous
Jan 26, 2023
More like giving both YRF and Dharma production at the same time.
0 REPLY